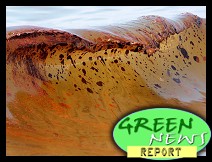 IN TODAY'S RADIO REPORT: Breaking: Moratorium struck down by judge, White House to appeal; Now it's 100,000 barrels of oil per day; More whaling?; Wildfires, floods and mudslides, oh my;...PLUS: Praying the Spill away ... All that and more in today's Green News Report!

IN 'GREEN NEWS EXTRA' (see links below): U.S. Chamber of Commerce should support climate bill, based on its own methodology; Twilight of the Coal Era?; USDA proposes antitrust rule on meat industry; Report: Food prices to rise by up to 40% over next decade; Malaria in Brazil linked to forest clearing; FERC to issue new rules upgrading nation's electicity transmission grid ...PLUS: Experts Warn Climate Change Is Beginning to Disrupt Agriculture ...

It is interesting that this same Martin L.C. Feldman, United States District Judge for the Eastern District of Louisiana, was not at all shy about providing a lecture to the Federalist Society about the "Supreme Court as Commander in Chief."

Recall that it was the radicals-in-robes of the Federalist Society who could not defer to the powers of the "Unitary Executive" fast enough when it came to arrest, detention and torture of detainees who had been snatched up by the rendition teams.

Now, suddenly, when it comes to corporate responsibility and the environment, these same radicals in robes tell us that a President has no power?

Ernest, (and Brad and others),

ya ever take a look at some of the doomer type comments from http://cluborlov.blogspo...m/2010/06/checkmate.html
and other sites like the above?

Between reading on the above as well as here and genius works like "Food Inc" and "The Corporation" I'm starting to see a pattern emerge.

What we're doing (and I mean all sane folk) about this mess now, parallels what Germans did while Hitler was rising and Italians did with Mussolini. Whatever was done was either not enough or the wrong direction or both.

From past personal experience, I know that chronicaling collapse is only useful if not fun when there is a phoenix moment imminent. At this point, I think a few of us are on to the fact that we're being carefully thrown bones by the progressive flavor of the moment. Lately it's Alan Grayson. Before Health Care reform sellout it was Kucinich. Before Banking reform sellout it was Dodd.

At what point do progressives wise up and say enought with the Don Quixote politics and do something more useful? What do we gotta do, pick a state and all move there to take over the popular vote, secceed for the US of Corporate America, and manufacture enough windmills, solar panels and local food to prove how successful success is?

Ok. Thank you I feel better. Still, now that I reread that, as long as it's not Idaho, I bet we could do better that we are now. There's gotta be some longer term perspective if not plan or this is all just too much time wasted watching jerks demonstrate that there is no bottom to their digging for hell. Vermont'd probably opt in to the plan.

The Conn AG Blumenthal sued FERC and Iso New England for 40 million dollars worth of power charged to New Englanders but not delivered. The case was taken all the way to the Supreme Court. Of course , they threw it out. FERC and Iso both said they would only open their books for the justice dept. Don't think deregulation was supposed to work this way.

58 people arrested in Europe for illegal carbon trading.Think it is going on in New England which has already enacted cap and trade. First Wind with ties to Larry Summers, the mafia and Enron has built two wind farms..one in NY and one in ME.Although publicly , they are supposed to be online...they are not. First Wind admitted that the wind farm in NY would not go online until 2011.In a lawsuit US govt vs FERC, over the building of the wind farm in ME..it was stated there was no room on the grid . It would be 2011 before the transmission lines would be in place.

Looks like things are right on schedule.The 2005 Energy bill ushered in this madness. Reliability takes precedence over cost, environment and citizen's wishes. So , they decided to subsidize the wind industry. If the wind blows too hard, the turbines have to shut down.It has to blow 25 MPH to generate power. How often does that happen? Just like shock and awe and the Iraq war.