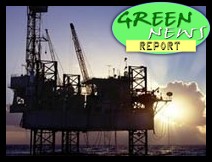 IN TODAY'S AUDIO REPORT: Who will build the World's Largest Solar Farm? Right. China!; Air pollution is bad for you. Who knew? ... PLUS: Oil, Oil, Toil and Trouble ... All that and more in today's Green News Report!

IN 'GREEN NEWS EXTRA': Are blackboards more environmentally friendly than whiteboards?; Waste Not, Watt Not: Energy efficiency cuts pollution while lowering energy bills; World's first off-shore floating wind turbine opens in Norway; ‘Once in a century’ downpour kills 20 in Turkey ... PLUS: The least sustainable seafood in the world, and why you should avoid it ....

OT but a heads up in advance of tonight: Glenn Greenwald is saying that Obama has started the advance prep work for rolling out his "Preventive Detention" plan...

... and while critics of such an obscenity abound on all sides the plan as Glenn sees it involves hammering on Progressives in particular as being anti-American terrorist sympathizers.

Thus such "unreasonable" voices should be excluded from the discussion.

The inclusion of wingnut stupidities as exact equivalents to informed Constitutional concerns will give the Admin drones plausible
deniability
"fair and balanced coverage" as an excuse for Obama taking out the left wing of his party... again...

And for some reason I don't think that such a ramping up of attacks on progs and their allies occurring at the same time as the health reform fight rages would be a coincidence.

Some Progs dared speak out... and now the
Admin is going to try to hammer them six ways from Sunday for their temerity.

Does wind power reduce carbon emissions?
“These calculations suggest that wind generation saves little greenhouse gas emissions when the emissions from the back-up are taken into account."
-------------
Solar power realities – supply-demand, storage and costs
"Conclusions: solar power is uneconomic. Government mandates and subsidies hide the true cost of renewable energy but these additional costs must be carried by others."
-------------
Solar realities and transmission costs – addendum
"Just the cost of the trunk transmission lines alone ($180 billion) is more than the cost of the whole nuclear option ($120 billion)."
-------------
Amory Lovins Discredited: Lovins Refuses to Answer David Bradish
This blog post by Charles Barton focuses on Amory Lovins failure to answer critics of his their paper The Nuclear Illusion which was critiqued by David Bradish
in his blog post Amory Lovins and His Nuclear Illusion - Final Thoughts in which he also addresses Lovins' erroneous "negawatts" and efficiency proposals. The erroneous ideas of Lovins' are repeated by environmental groups and anti-nuclear groups apparently without doing adequate research and investigations. Making these erroneous proposals the centerpiece of our energy policies are to the detriment of the economy and future energy security.
------------
These 4 videos are an informal interview with nuclear physicist George Stanford. He talks about some facts that environmental and anti-nuclear groups ignore or lie about.
The Energy Discussion Part 1
The Energy Discussion Part 2
The Energy Discussion Part 3
The Energy Discussion Part 4
------------
Energy From Thorium: A Nuclear Waste Burning Liquid Salt Thorium Reactor
This video is a proposed solution to both global warming and energy for all the world's people, including the developing nations, enough to raise the standard of living of everyone to the level of people in the Europe and the United States without the environmental impact of so called renewable energy technology. In case you didn't know renewable energy is not green.