Texans Pay Big Price for Enron-Like Deregulation
A Green New Deal didn't cause Lone Star State's deadly power crisis, but it could help prevent the next one... 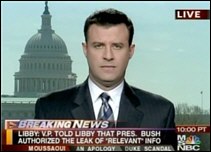 David Shuster who has been following the "Plame case" closely reports on the breaking news for MSNBC. The Raw Story has more information.

It's hard out here for a traitor pimp...

That will be the future jailbird Bush's new theme song.

Other than as an attempt to discredit Wilson, what other possible reason could there be to out Plame? Why did they not warn other reasources still working undercover, behind enemy lines, as employees of Brewster Jennings before outing Plame? Did they not know any resource caught would be captured?

Not only did Bush and Cheney take a valuable resouce (Valerie Plame) out of the real war on terror in the mideast, but they also took the under cover company (Brewster Jennings) out of the war as well. Undercover resources lost their lives because of what Bush and Cheney did. Plus, they have endangered every man, woman and child in America.

Both Bush and Cheney must be arrested and tried for high crimes of treason, for which the maximum penalty is d e a t h!

I find it very strange that a few years ago Shrubby delcared he would fire anyone involved.. then of course, that changed to "convicted".. but still, why say all that crap when the Admin could have (and SHOULD have) said, WHEN IT WAS HAPPENING, "we authorized the declassification of that intel"..?

This stinks of a retroactive coverup for Rove. To keep turd blossom on the books instead of getting him put in prison.

And Libby will go to prison for lying about all of this? FOR WHAT? If this was "on the up an up", why let Libby twist in the wind? and why wait YEARS to say "oh, yeah, I (ab)used my power as President to authorize the declassification"?

Hey Kevin Schmidt
One other benifit of leaking Valeries identity is so they could do the same thing with Iran that they did with Iraq. Valerie Plame specifically tracked weapons of mass destruction for Iran. Now the only person and undercover company that could refute their made up claims about why we must also go to war with Iran is defunct.

I think its great news that bush will take a lot of heat for this, although I doubt it will lead to any direct action against him.

Not to derail the topic, but I'd like to hear more information about what Brewster Jennings Co was 'supposed' to be doing before they were outted. It would give a MOTIVE for bush to have spoiled their cover, which then would deeply implicate him. FTW and Wayne Madsen claim that Brewster Jennings Co had nothing to do with WMDs (that was supposedly a CIA cover-up story once their cover was blown), but actually was working with middle-east oil interests to reveal inside information on OPEC/Oil Co supply and price fixing.

If that's true, it would have made complete sense for dubya to 'out' brewster jennings co so that his texas oil buddies (and Sheik buddies too) could roll in the oil profits without any potential pesky CIA intelligence to interfere with the game plan.

FYI, I usually take Wayne Madsen with a grain of salt (much of his reporting isn't substantiated when others investigate) - but Michael Ruppert at FTW has actually been right on a several topics when noone else would touch them.

Sorry for going a bit off-topic, but somebody please pin a medal on HARRY TAYLOR, new American hero. Please check out the video at ThinkProgress...
http://thinkprogress.org...h-event-goes-off-script/

...of Mr. Taylor who told the president at a recent PR event:

"...I would hope from time to time that you have the humility and grace to be ashamed of yourself..."

I think the full transcript is there too...

So is an official date set for Fitzmas?

How many things must be brought out before Bush backers realize he's a phoney? How ANYONE could believe him at this point about ANYTHING is well beyond me. This corruption far surpasses anything Clinton did. Impeachment of this (bad word) is more than justified, it's necessary if we are going to save this country.

It is clear to me that our beloved and benevolent president does not have enough "in chief" titles.

It is only fitting that a great war president have lotsa "in chief" titles.

Liar in Chief is not enough ... he needs to be Leaker in Chief, Torturer in Chief, I Spek Inglush in Chief, and I Give American Ports And Jobs Away in Chief.

The one title that our beloved and benevolent republican congress won't give him, but which he sorely deserves, is Impeached in Chief.

The misers only have acted on one other label, Censored in Chief.

They were very stingy with that label and acted as if they wanted to keep it for themselves.

November is really not so far away.

"On an issue the GOP has dominated for decades, Republicans are now locked in a tie with Democrats _ 41 percent each _ on the question of which party people trust to protect the country. Democrats made their biggest national security gains among young men, according to the AP-Ipsos poll, which had a 3 percentage point margin of error.

The public gives Democrats a slight edge on what party would best handle Iraq, a reversal from Election Day 2004."

"If the President does it, it's not illegal" ~Richard Nixon

IN NOVEMBER WE VOTE

One report has it that Meredith Vieira, the replacement for Katie Couric as co-host of NBC's Today this fall marched in an anti-Iraq war protest back in August of 2004 (link here).

Okay, now they're saying that if Bush leaked the information, it's not illegal??

So Bush was the leaker, and we're expected to accept that it's no big deal that he:

..allowed an investigation that took years and wasted taxpayer dollars to find out who leaked classified information that wasn't really classified;

...knew he was the leaker, yet publicly declared over and over that he wanted to "get to the bottom of it";

...knew that Valerie Plame was working on a program to track Iran's nuclear capabiliities - the country that is threatening enough that the plan for pre-emptive invasion is already drawn up - but that her work wasn't important enough to keep her identity secret.

Someone's put together a pretty good list of quotes here, though I'm sure there are others:

The President Fires Himself

Be careful about this story.

The evidence comes from Libby, who is under indictment for lying and perjury, and obstruction of justice.

In other words, one well schooled in republican dictatorship policies.

This may be a set up where they can say you guys believe liars or he could later say he was lying.

I have no doubt, and said so a year ago in posts here, that Cheney and Bush commanded these events, however my concern was with evidence.

They are snakes in the grass and we need to be careful about compulsion to believe any of them.

But Dredd, they have to held accountable for saying one thing and doing the opposite. If Libby is lying about Bush being the leaker, then Bush can say, "Mr. Libby is lying." Then Libby's lawyer will be on the spot to respond, and his response will either reveal Bush as the liar (again), or Fitzgerald will have another count of perjury against Libby. What is there to fear about that?

I agree with Savanster and Kestrel. The real story here isn't whether the information was classified or not when Bush authorized leaking it. It is that Bush said he wanted to get to the bottom of something that he was already at the bottom of when he said it.

This was so good I had to steal it from William Rivers Pitt's piece, 'The Leaker-in-Chief':

Is there not some chosen curse,
Some hidden thunder in the stores of heaven,
Red with uncommon wrath, to blast the man
Who owes his greatness to his country's ruin?

From that Will Pitt piece I referred to earlier...

"I'd like to know if somebody in my White House did leak sensitive information," said Bush on October 28, 2003. On this same day, Bush said, "I have no idea whether we'll find out who the leaker is, partially because, in all due respect to your profession, you do a very good job of protecting the leakers."

Alot of people have used the word 'treason' in relation to the Plame leak, but now that the president is in the fire over it, what I hear are people yet again bending over backwards to gloss it over. I haven't heard the 't' word lately not since this Libby claim came to light. I wonder why.
I think Mr. Pitt may be the first to just come out with it:

Dredd is right. Something fishy here. I think Cheney is going to take a dive then they will replace him with the new VP to run in 08. This is the strategy to use taxpayer resources for the next campaign since the VP has access to airplanes and forums that a challenger does not have access to.

2 hours ago
WASHINGTON - President Bush declassified sensitive intelligence in 2003 and authorized its public disclosure to rebut Iraq war critics, but he did not specifically direct that Vice President Dick Cheney's former chief of staff, I. Lewis "Scooter" Libby, be the one to disseminate the information, an attorney knowledgeable about the case said Saturday.

Bush merely instructed Cheney to "get it out" and left the details to him, said the lawyer, who spoke on condition of anonymity because of the sensitivity of the case for the White House. The vice president chose Libby and communicated the president's wishes to his then-top aide, the lawyer said.

It is not known when the conversation between Bush and Cheney took place. The White House has declined to provide the date when the president used his authority to declassify the portions of the October 2002 National Intelligence Estimate, a classified document that detailed the intelligence community's conclusions about weapons of mass destruction in Iraq.

The new information about Bush and Cheney's roles came as the president's aides have scrambled to defuse the political fallout from a court filing Wednesday by the prosecutors in the complex, ongoing investigation into whether the identity of CIA officer Valerie Plame was disclosed to discredit her husband, former Ambassador Joseph Wilson, an Iraq war critic.