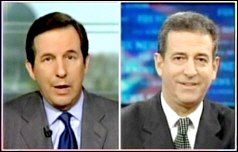 As Wallace sets up each Bush Administraion strawman, Feingold knocks it down with the simple truth. The President should not be allowed to break the law.

Meanwhile, the Supreme Court, certainly more dangerous than a dorky Chris Wallace, has given a strong fascist drink to the already drunken regime.

They refused to hear the Padilla case (link here).

The way this regime reads tea leaves, you can get ready for more fascism.

You had better believe that any American citizen can be branded an "enemy combatant" and held indefinitely, without charges, and without a lawyer, in one of the Roveing prisons or anywhere else.

The internment camps at 29 Palms for instance. Get ready, this was the big one.

There's you're liberal media. Chris Wallace is a schmucky-schmuck who is clearly being given some kind of directive to deflect Feingold's remarks. He's just not smart enough to do it. Feingold puts on a clinic. Again.

Now that Mike Wallace has retired, I wonder if Chris Wallace might be able to borrow his dad's journalistic balls....nah, that's too much to hope for.

Why does Mike Wallace always look mentally challenged? Remember the last pic of him on this blog? A lot of rightwingers look like that. Senator Lynsay Graham, for example.

It just amazes me how the right-wing can't understand that suspending the rule of law is BAD for everyone. Course, they are still deluded and thinking they are some how exempt because they suckle at the koolaid spigot.

Russ did a great job of keeping it on point.. that Shrubby broke the law, period. Making up laws by our leader is un-American, period. But, the koolaid drinkers can't understand that. With a little luck, Chris' "coup" will happen and Shrubby will be impeached in 2006.

Brad, thank you for posting this. Expect some traffic. Keep up all your hard work.

:D That was a complete and final spanking. Feingold for president.

At least for VP--love that dude.

I myself would go for a Feingold/Clark ticket. I
think they could kick some ass. What do you
think people...... :rolleyes:

I am liking FeinGOLD * more & more each day !

This is my kind of Democrat

Except Patrick Leahey . I like him as a Senator ~

I'd LOVE a Feingold/Clark ticket!!! The Republican draft-doging candidate would smear combat-vet Clark, and the idiot GOP backers across the country would fall for it, because they are stupid.

I would support voting for your candiate (Feingold would win my support at this point).. and the one with the most votes is Pres.. and the runner up is VP.. screw this "ticket" crap, it's like all the BS they do with bills.. add-ons and amendments that kill the purity of the intent.

Mike Wallace pulled out too soon when he made chris . . .

Wonder where the trolls are.. Got a PERFECT example of their right-wing mentality of "it's ok, someone else did it so I'm not so bad". Rush said it's not a big deal (essentially) that he called a stripper that claims she was raped a "ho"... because Keanu Reeves made some comment about rape from a scene in a movie he did?! How does someone else being dispariging make it ok for you to do it too?

Guess you have to have a pretty tiny IQ to make that totally fucked up jump of logic. Shorted out on pain-killers is a good excuse for Rush, I suppose. Perhaps most Repukes are medicated..?

This is the strongest I've seen Feingold on this subject. I feel much better about him because of it. I was mad that he was SO meek about introducing the censure resolution. Looks as if there's some air in his lungs now.

Can Feingold block their power to fill those camps with anyone they want?

Russ, please pass around whatever it is you're drinking to everybody who goes on FOX News. Even watching Russ handling this with skill, I'm still amazed. what happened? Why is there a high rated cable news operation that forces public figures to run the gauntlet? Has any Administration EVER had such a dedicated and belligerent voice raised on it's behalf? with commercials? 24 hours a day?

Russ did great but still, I just can't get over the non-stop Pro-Bush Network. Even if Dems get in, they will STILL have the drip drip drip, Chinese Water Torture of FOX News to deal with. It depresses the hell out of me.

Feingold stated his position on censure with such great class. Wallace has that confused dog look on his face.

The irony of the dumb fck trying to defend Bush for taking his stance above the law and -0- accountability for his illegal actions is there are so many stupid Amerikan losers standing up to justify this line of reasoning. In other words, it's OK to steal money from a bank that you work at if you tell some people you work with that you stole the money. Moving forward, this self righeous bastard can then use this thieving experience to bend future US law to justify any future thefts. Fcking moronic. Everyone has heard the saying power corrupts however these "people" seem to think because they make up a majority in Federal government that they can make the rules up now as they go along and fuck everyone else. My anger has no boundries for these bastards. I don't know what amazes me more: that there's really American people who believe their shit or the fact they speak with so much attitude and conviction to the extent that they act like they believe their own shit. You real traitors trying to destroy our US system of government must be impeached and jailed. I look forward to seeing all you greedy lying fcks hanging publically. Chris: maybe we can see you hang by your microphone cable.

I would also like to see the lying murderous bushit administration go to court in Iraq in front of a jury of 12 Iraqi civilians and retell their lies for ordering the deaths of 30,000 civilians.

I can only second the previous statement posted:

Mike Wallace pulled out too soon when he made chris . . .

You just can't say it any better than that!!

As a Wisconsinite I've watched Russ do this same thing in campaign debates. His republican opponent in '04 used the same talking points Bush used to rope-a-dope John Kerry, but Russ always kept his head, nailed his points and made his opponent look like a dimwit.

Feingold's combination of blistering intelligence and aw-shucks common sense makes him the Right's worst nightmare: he won 60% of the vote in a state where Kerry just squeaked by.

Man, he must be so ASHAMED about what a loser his son grew up to be.

And I've got to say, I just LOVED the way Senator Feingold BITCH SLAPPED Chris.

The Senator was calm, cool & collected.

Chris was ... short circuited cuz all his points were shot down. Every single one of them!

Feingold does a fine job however based on the video and testimonial evidence of the events on 9/11 i stop short to agree that it was a terrorist attack. The fact would support the President decided to declare his own US holiday and named it September 11th. Mr. Feingold if you read this blog, i would ask you to do some personal investigation of 9/11..specifically building #7 of the World Trade Center and the missile that struck the Pentagon.
You rock!