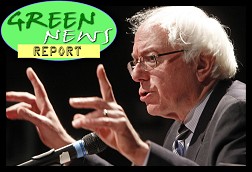 IN TODAY'S RADIO REPORT: Senator Bernie Sanders, climate hawk, enters the 2016 Presidential race; Thanks to fossil fuels, California still has the nation's dirtiest air; Study finds most extremely hot days caused by global warming; PLUS: Pope Francis wants to protect God's Creation, and the rightwing, fossil fuel-funded Heartland Institute wants him to knock it off... All that and more in today's Green News Report!

The State of the Air 2015 report shows that California’s clean air laws and initiatives are working,” said Olivia Gertz, President and CEO of the American Lung Association. “However, over 70 percent of Californians — 28 million residents — live in counties plagued with unhealthy air during certain parts of the year.

"Rate Of Climate Change To Soar By 2020s, With Arctic Warming 1°F Per Decade (Climate Progress)"

New York City, then, may face more of the "1-in-850 year event" SLR surges (The Question Is: How Much Acceleration Is Involved In SLR? - 4).

The source of those surges may now be known.