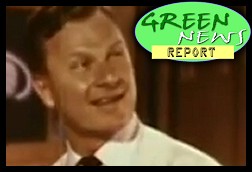 IN TODAY'S RADIO REPORT: Deadly tornado outbreak rips across the South, but safer building codes still stalled by lawmakers; Good news for those who breathe: Supreme Court upholds EPA's cross-state pollution standard; PLUS: Happy 60th Birthday, solar energy! Look what we dug up to celebrate!... All that and more in today's Green News Report!