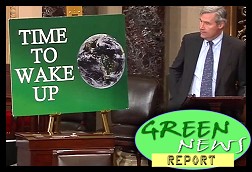 IN TODAY'S RADIO REPORT: Up all night for climate in the U.S. Senate; Alaska's iconic Iditarod race struggles without snow; California breaks solar power records; PLUS: 3rd anniversary of the meltdown at Fukushima, and the legacy of nuclear disaster ... All that and more in today's Green News Report!

IN 'GREEN NEWS EXTRA' (see links below): Climatologist who predicted California drought 10 years ago says it may soon be ‘even more dire’; Daylight Savings Time could be costing billions yearly in electricity; Canadian tar sands oil gets new route across US; IEA: wind and solar can carry bulk of energy transformation; New ozone-depleting gases found in atmosphere; Get ready for El Nino...maybe; What slowdown? NASA says long-term warming likely to be significant; Duke CEO: All customers to pay for coal ash cleanup ... PLUS: 'Pollution burden' much higher for California's minority populations ... and much, MUCH more! ...

That is gallows humor ... like crew members joking when a craft holding many citizens is in grave danger.

the new nsa report talks about interfering with communications, changing communications even taking stuff off your puter and replacing it