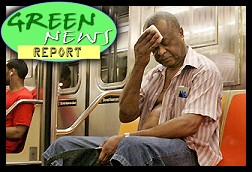 IN 'GREEN NEWS EXTRA' (see links below): Globally, June was 2nd hottest on record: NASA; US Algae Company Turns Sewage Into Biofuel; Alberta tar sands spills: no end in sight; Discounts mean electric car costs near zero; Melting glaciers around the world experiencing ‘Jokulhlaup’; Wildfires spread across warming Arctic boreal forest; Animal welfare activists sue to overturn 'Ag Gag' law... PLUS: 'Elysium': For the wealthy, climate-gated communities. For the rest of us, whatever is left ... and much, MUCH more! ...

You all must feel pretty tied up to report stories where individuals representing energy companies and so called leaders of people repeatedly make the wrong moves or try to justify dangerous careless actions with anti-science lies? It's good to get GNR so here's a link to a tune by the band from back in the day!

It's from a time long before fracking and the island of Japan knowingly releasing nuclear reactor radiation into the ocean.

The green axial precession calendar is missing from degenerate civilizations.

We need to talk about an eco-friendly, eco-wise calendar more often.