De Facto Summer Fund Drive
It started as Brad's birthday week plea, but we're continuing it in hopes of breaking even in these tough economic times for all. We want to continue The BRAD BLOG's free-for-everyone, no-paywall policy forever!
If you can help, please click here!...
Latest Featured Reports | Monday, August 15, 2022 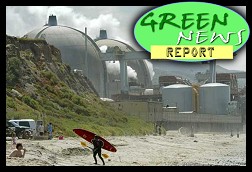 IN TODAY'S RADIO REPORT: Record jump in carbon emissions on track for 5°C increase in world temps; US & China reach major climate agreement; Another court victory for Monsanto; PLUS: As California breaks new solar records, one of the state's old nuclear plant will now shut forever ... All that and more in today's Green News Report!

« PREVIOUS STORY "What's the Real Target of our Privatized Surveillance State: Terrorism or Democracy?"
» Go to The BRAD BLOG front page «
"My Appearance on Abby Martin's 'Breaking the Set': On NSA Leaks, Snowden, Greenwald and Being Targeted by the U.S. Surveillance State [VIDEO]" NEXT STORY »

That is good news about the permanent closing of San Onofre power plant.

I get a good laugh whenever I hear that clip from Fox "News" about how Germany has more sunlight.

I spent all of January 1968 in Germany. I think I saw the sun twice.

Reducing, reusing, and recycling in your home helps conserve energy and reduces pollution and greenhouse gas emissions from resource extraction, manufacturing, and disposal. If there is a recycling program in your community, recycle your newspapers, beverage containers, paper, and other goods. Also, composting your food and yard waste reduces the amount of garbage that you send to landfills and reduces greenhouse gas emissions.