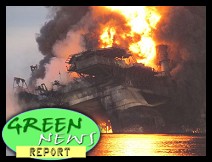 IN TODAY'S RADIO REPORT: Water, water everywhere but not a drop to drink --- in Boston and Nashville; MORE deadly storms kill 29 across the South ... PLUS: Slow-motion ecological and economic disaster in the Gulf goes from bad to worse, and where are the calls for clean energy legislation?! ... All that and more in today's Green News Report!

In a May 3 New York Times editorial, "Drilling, Disaster, Denial," Paul Krugman points to a Gallup poll which found: "Americans are now less worried about a series of environmental problems than at any time in the past 20 years" --- a finding mirrored by surveys conducted by the Pew Research Center which revealed that the percentage of Americans who believe "there is solid evidence that the average temperature on earth has been getting warmer over the past few decades," had dropped from 71% in April 2008 to 57% in September/October 2009.

After pointing to the catastrophic events --- the 1969 Santa Barbara oil spill and the fire atop a polluted Cuyahoga River --- which gave rise to the first Earth Day in 1970, the Clean Water Act and the Environmental Protection Agency, Krugman suggested that the success alleviating "visible pollution" that was involved in these "photogenic crises" led to reduction in public concern for the less visible impact "of pollution that's invisible, and whose effects unfold over decades rather than days" --- an invisibility which opened the way for hard-right, denialist, anti-environmental propagandists like Rush Limbaugh to succeed.

While there is empirical data supporting Krugman's suggestion of an adverse impact of anti-environmental propaganda, often funded by the likes of Exxon-Mobil and others in or connected to the fossil fuel industry, Krugman's analysis falls short because he fails to examine the role of the mainstream corporate media, especially television, in fostering the invisibility he decries...

After hearing the lazy corporate media meme over the last several days asking whether the BP oil spill catastrophe was "Obama's Katrina," it was nice to see the meme properly re-aligned last night on Twitter by @OTOOLEFAN who announced: "This oil spill is Sarah Palin's Katrina."

Apparently he wasn't the first, however, to do so, as the ubiquitous @Shoq gave credit to @yrustupid's first invocation.

And with those attributions out of the way, I'll take the opportunity to note that after two long weeks on the road and often off the grid (when I wasn't doing Russian TV from NV or guest hosting for Malloy from San Fran) for largely unrelated work, I'm finally back in the 'hood today with much to get caught up on this week. Thanks for your patience during my mostly-absence over the last coupla weeks and (possibly) in the coming days as I get caught up. My thanks to both The BRAD BLOG's Ernie Canning and Brilliant at Breakfast's Jill C. for filling occasional gaps as they were able to find time while I was gone!

Feel free to use the comment section on this item to let me know about anything you think I may have missed over last week or two but still need to know about!

Guest Editorial by Jill C. of Brilliant at Breakfast

In Florida, state Senate Democrats are just barely blocking (for now) an abortion restriction advocated by Republicans that would force women to have, pay for, and view, an ultrasound image before having an abortion.

In Oklahoma, it is already law that women are forced to undergo and view such an ultrasound, along with listening to a detailed description of the embryo or fetus. In a completely inconsistent addendum, a doctor is permitted to withhold information about any defects that are revealed in such an ultrasound.

In Virginia, new budgetary measures cut Medicaid funding for abortions, even if the woman's life is in danger.

In Nebraska, a medically unsupported "pain provision" bars all abortions after 20 weeks and requires women seeking abortions before then to undergo a mental health evaluation.

In Kansas, only a gubernatorial veto stands between women's right to self-determination and being reported to the state for having abortions.

Why now? Foes of women's sovereignty over their own bodies have been working on abortion restrictions for decades. But after standing pat during the Bush years, perhaps thinking that sooner or later George W. Bush would give them the magic prize they've coveted for so long, all of a sudden state after state is passing abortion restrictions that make very clear the misogynistic leanings of these states' legislatures. Forcing women to have invasive vaginal ultrasounds? Forcing them to view images? Mental health evaluations?

But is it just about misogyny? Or does it have something to do with the pee-in-the-pants terror of the teabag movement at the inevitable end of white majority that's coming in this country?