Congratulations to the election integrity advocates in Tennessee. Yesterday, the Senate blocked an effort to delay implementation of a 2008 law requiring a "paper trail" on all voting machines in all 95 counties by 2010....

Seemingly dead-set on hastening its obsolescence, Washington Post has fired "White House Watch" columnist Dan Froomkin, one of their only unflinching truth-tellers who never stopped telling those truths, even through every dark year of the former oppressive regime when McCarthyesque tactics prevailed, and 99% of the men and women who held jobs like Froomkin's failed the nation by pulling their punches and folding to the cynicism of fear and intimidation.

Says Froomkin in response: "I'm terribly disappointed. I was told that it had been determined that my White House Watch blog wasn't "working" anymore. But from what I could tell, it was still working very well. I also thought White House Watch was a great fit with The Washington Post brand, and what its readers reasonably expect from the Post online."

Ironically, folks like Howard Kurtz and Dana Milbank remain employed by WaPo in the meantime. So do unapologetic wingnut liars and tools such as Charles Krauthammer, William Kristol, George Will and a bevy of others. And in more irony, despite the paper's purge of just about anyone who might have been described as "liberal" or "progressive" (and yes, Froomkin held Obama feet to the same fire he held Bush's), the still-employed wingnuts will continue to label the hard-right charging WaPo as "the liberal media," even as the editors and publishers of the paper run out of money, wonder what happened to them, and blame "the Internet" for their own failures in falling for the bait.

"As I've written elsewhere," Froomkin said in his statement, "I think that the future success of our business depends on journalists enthusiastically pursuing accountability and calling it like they see it. That's what I tried to do every day. Now I guess I'll have to try to do it someplace else."

Today's news has a lot of variety, including commentaries and speculation about the Iranian election and the pending Supreme Court decision on the Voting Rights Act...

[Ed note: Correct MP3 version inserted. Tuesday's version of the GNR, rather than today's, had originally been linked to the online player below.] 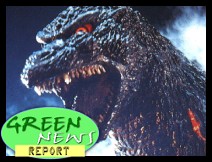 Got comments, tips, love letters, hate mail, Godzilla sightings in your home town? Drop us a line at GreenNews@BradBlog.com or right here at the comments link below. All GNRs are always archived at GreenNews.BradBlog.com.

What's perhaps most interesting here is what isn't mentioned in this story, as written on the Los Angeles Times' "L.A. Now" blog. First, here's their entire blog item...

Laguna Beach resident Mark Jacoby, who collects signatures for petition drives, pleaded guilty to a misdemeanor and was sentenced to three years' probation and 30 days of service with the California Department of Transportation.

Jacoby, owner of Young Political Majors, registered to vote at Los Angeles addresses that were not his own. State law requires petition circulators to be qualified voters. Jacoby will also be required to show proof he is registered at his correct address.

And what they didn't bother to mention in that story?...

In Florida, Judge Richard Feder ruled in favor of Broward County’s Supervisor of Elections Brenda Snipes. In violation of her agreement, Snipes failed to post notices telling voters that a vote for one name on the ballot was actually a vote for Mardi Anne Levey. The judge decided that Snipes failure wasn’t intentional, so he didn’t hold her accountable.

The situation in Iran is demonstrating that the true measure of an election is its legitimacy – legitimacy of the results and legitimacy conferred to the government, both of which depend on the extent to which the results are believed by all parties....

Meant to run this clip from Crazy Land (aka Fox "News") over the weekend. You may have seen some portions of O'Reilly's flip-out previously, but the entire thing is worth a look. Feelin' guilty much, Mr. O'Reilly? What a maroon (and that's putting it nicely). Crazy Land gets crazier and crazier by the day...

The BRAD BLOG covers your electoral system fiercely and independently, like no other media outlet in the nation. Please support our work with a donation to help us keep going (Snail mail, more options here). If you like, we'll send you some great, award-winning election integrity documentary films in return! Details right here...

I was on CNN's 'Live' webcast program this morning to discuss the Iran situation, along with two other bloggers, Fausta Wertz of FaustasBlog.com and Ben Parr of Mashable.com, in their "Blogger Bunch" segment (a name that I hate, but maybe that's just me)...

As always, you'll let me know how I did.

(This appearance follows my previous appearance on CNN a month or so ago, discussing 'Plan B'. Just in case you missed it or otherwise just can't get enough of 'Brad on CNN'.)

Yesterday's deluge of articles about Iran turned into an avalanche today. To focus strictly on election-integrity related articles, we cut out many excellent articles about the political ramifications of this historic event.... 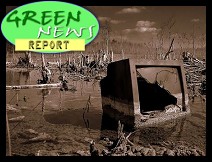 IN TODAY'S AUDIO REPORT: National security vs. your right to know about highly hazardous waste dumps; A tiny town vs. Big Coal; Digital TV transition vs. disposal of old, toxic TVs ... PLUS: The GOP's "new" energy plan, same as the old plan.... All that and more in today's Green News Report!

Got comments, tips, love letters, hate mail, radioactive nuclear waste? Drop us a line at GreenNews@BradBlog.com or right here at the comments link below. All GNRs are always archived at GreenNews.BradBlog.com.

From the deluge of coverage on Iran, we tried to select representative, information articles that weren't too repetitious. Many whose headlines don't explain why we chose them have annotations so you'll know why. The aftermath of the Iranian election exemplifies the way Twitter, blogs, and other social networking/media are transforming the way private citizens can monitor their elections....

At the risk of undermining the vigorous debate and discussion now ongoing in response to my Saturday morning article drawing a comparison between Iran's '09 election and Ohio's '04 election (and the ongoing speculation about the reported Iranian results going on just about everywhere else today), allow me to amplify a bit on the point I was hoping to get at in that piece, written as reports were just coming in about skepticism in the reported results.

Since The BRAD BLOG began reporting on issues of democracy and concerns about elections, most intensely beginning on or about the early morning hours of November 3rd, 2004 and continuing ever since, we've likely investigated, researched and/or written as much or more on virtually every aspect of the topic as any other media outlet in the world.

In the process of observing one election after another since that time, and the increasingly inevitable ensuing questions about, as well as disbelief and/or belief in the validity of each election's results, one thing has become crystal clear: without complete transparency and 100% citizen oversight of every aspect of any given election, most notably the tabulation of its ballots, certainty in any given officially-announced result has become nearly impossible.

Without the transparency required for democracy to actually work, each "democratic" election, whether in this country, or in any other, has become more and more like Russian Roulette, but without the certainty...

The New York Times has an unbylined editorial today, headlined "Neither Real Nor Free" which blasts the Iranian election, alleging that "it certainly looks like fraud."

Our friend Michael Jay, a former delegate to the California Democratic Party who amended their party platform to include language encouraging Democratic candidates to not concede until every ballot is counted, took the opportunity today to riff on our weekend comparison of Iran '09 to Ohio '04 with a letter to the NYTimes editors which begins as follows...

Major typos in "Neither Real Nor Free"

To The Editor:
I'm afraid your spell check software got the better of you in preparing "Neither Real Nor Free," (Editorial, June 15, 2009.) It appears both the country and a key political party were misidentified.

I've included a corrected, and abbreviated, version. Too bad the Times, and other news outlets, didn't publish such editorials following our 2004 election.

See Michael's "corrected" version of the piece, sent with his letter to the Times editors, below...

The Iranian Presidential election outcome and aftermath, of course, dominate the news today. We did the best we could to sort through the billions of articles and select some that were informative and varied. But if you want more, they’re easy to find....