We've been reporting on the GOP's October "Surprise" over the last few days (challenges to Democratic voter registrations in a number of states, and, perhaps more notably, their bogus PR campaign to charge that ACORN, a community organization that heroically registers millions of low-income voters who nobody else bothers to, is committing "voter fraud." See here, here and here, for example.)

But the November Surprise, as we've been trying to warn for many months (if not years), will undoubtedly be the thousands who show up to the polls to vote on November 4th, only to find out that they have somehow "fallen off" the voter rolls.

We've urged folks to check their registrations, even if they recently voted in a primary election, to make sure they haven't been purged (info on how to do that quickly in all 50 states, right here).

Late last month, CBS News reported on voter purges occurring in at least 19 states across the country, many of them swing states, naturally.

Today, the New York Times has published a scathing report, based on a detailed investigation revealing that "Tens of thousands of eligible voters in at least six swing states have been removed from the rolls or have been blocked from registering in ways that appear to violate federal law."

We've got to run out to host an hour of "Election Year Special Coverage" right now on KPFK/Pacifica, (guests to include filmmakers Patty Sharaf of Murder, Spies & Voting Lies: The Clint Curtis Story and John Ennis of Free For All!: One Dude's Quest for Democracy), so here are some very notable, must-read excerpts from the Times full report for the moment. So, we may have more thoughts on all of this later today, but for now, please read on!...

Late last week I had the "pleasure" of appearing on Tavis Smiley's public radio show, along with GOP "voter fraud" zealot and propagandist Hans von Spakovsky, about whom we've written quite a bit here over the years. The show was pre-taped last Thursday, ran over the weekend, and will continue to be available at Smiley's website throughout the week.

The audio discussion, which became rather heated at times, is posted at the end of this article.

In his introduction, Smiley credits von Spakovsky as being "from the Heritage Foundation." But in addition to being funded by those unapologetic Republicanists, it goes unnoted that vS, a former chair of the FEC, recess-appointed by Bush, then blocked by the Democrats in the Senate when his appointment came up again, was formerly embedded in the Bush DoJ's wholly-politicized Civil Rights Division voting section.

At the DoJ, he helped to deconstruct the beloved Voting Rights Act of 1965 by, among other things, pushing through polling place Photo ID restrictions in places such as Georgia, against the advice of just about every career employee in the division. (The law was later found to be an "unconstitutional day poll tax" by the courts, but ultimately allowed by a higher court, and still under challenge by Democrats in the state.) He was also instrumental in bringing phony "voter fraud" charges, such as those against ACORN workers in Missouri, filed just days before the razor-thin 2006 Senate election, in violation of the DoJ's own written rules against bringing such indictments just prior to elections where they are likely to affect the race.

Perhaps even more noteworthy, but unmentioned by Smiley, is that even with all of that, the disgraced von Spakovsky has been secretly hired, at tax-payer expense, as a consultant for Bush's similarly compromised, and now ironically-named, U.S. Commission on Civil Rights, to help monitor the job that the DoJ will (or won't) be doing to monitor the 2008 general election.

In any case, vS remains an unapologetic democracy hater, hell-bent on keeping Democratic-leaning voters away from the polls and, as you'll note during the interview, a liar.

Normally, however, he's not faced with anybody who can actually call him on his bullshit. That wasn't the case this time, as I was there, and was able to do exactly that... 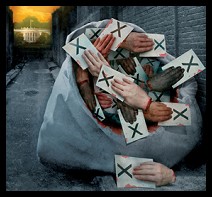 As you'll note by the increase in items in John Gideon's Daily Voting News, coverage of election concerns is again reaching a fevered pitch. When it comes to election machines, most of those reports come far too late to effect any real change (other than perhaps to help encourage election officials to ensure there will be plenty of paper ballots on hand, to make sure they tell voters and poll workers about them, and then to finally count those damned ballots!)

It's clear, however, that while most election officials likely do their job honestly, there are a great number of them around the country who have little interest in voters --- certain voters --- being allowed to excercise their franchise at all.

While there is little time to do much about the machines, as they prepare to melt down, there is still time do something on the front-end voter suppression issues. Yet sadly, despite a few spotty efforts around the country, it seems those parties that do have an interest in voters actually voting (such as Obama and the DNC) have little clue about what they are facing. At least from what I've been able to learn about coordinated plans --- or lack thereof --- to combat the Republican assault on voting.

And, all the while, as Democrats dither, the well-coordinated Republican War on Democracy continues apace around the country, with new and disturbing reports coming out almost by the hour, revealing the national extent of the GOP's anti-democracy campaign.

The effort, by a number of election officials in so-called "swing states" around the country, meant to keep Democratic-leaning voters, such as students and minorities, from casting votes this year, is remarkable and growing. It is, of course, also appalling...

The chairman of the U.S. House Judiciary Committee, Rep. John Conyers, is calling on the John McCain campaign to "immediately halt Republican vote suppression efforts," as seen recently in Michigan --- where a county GOP chair announced his intention to use home foreclosure lists to challenge voter eligibility at the polls on Election Day --- and elsewhere.

Conyers has announced hearings on these issues, and is calling on Attorney General Michael Mukasey to launch an immediate "full scale investigation" into these matters. He has sent letters both to McCain [PDF] and to Mukasey [PDF] (the latter signed by 23 members of Congress) to that effect, as well as issuing the following statement today...

MSNBC reports on the Dem injunction filed this week to try and stop the MI GOP's "anything-to-win" scheme to use home foreclosure lists to challenge voters at the polls this year. Kieth Olbermann discusses the matter with Allen Raymond, the formerly-jailed Republican, election rigger, and author of How To Rig an Election. Raymond notes that the scheme, while unseemly, is hardly unusual for the GOP...

Comments Off
Article Categories: Election 2008, Dirty Tricks, Republicans, Michigan
Republicans Ramp up Voter Disenfranchisement Efforts Ahead of November Election
GOP Attempts to Challenge Foreclosed Families at Michigan Polls, Toss Thousands of Voters Over Typos in Florida and Game the Senatorial Ballot in Mississippi
Just Another Day in their Continuing War on Democracy...
By Steve Heller on 9/11/2008 6:00am PT

Three recent stories have come to light about the Republican Party's latest and sometimes illegal efforts at voter disenfranchisement. Unfortunately, these three stories are only the very tip of an enormous iceberg.

And of course, if you're not registered to vote, what in the hell are you waiting for??

First, Michigan... We've learned from the Michigan Messenger that James Carabelli, the Republican Party commissioner for Macomb County, is "planning to use a list of foreclosed homes to block people from voting in the upcoming election as part of the state GOP's effort to challenge some voters on Election Day."

Carabelli, as quoted in the Messenger, says, "We will have a list of foreclosed homes and will make sure people aren't voting from those addresses."

But J. Gerald Hebert, a former voting rights litigator for the U.S. Justice Department and currently the Executive Director and Director of Litigation for Campaign Legal Center, says the practice is simply illegal...

Our Electoral System Meltdown continues as more and more reports come in on epidemic Electronic Voting Machine failures around the country. It's neck and neck right now as Diebold and ES&S battle it out for the prize of Worst Company, Worst Service, Worst Technology and Best Excuse Maker. But we've got a long way to go in this Election Year, so it's still anyone's contest. (Anyone's but the voters, that is.)

A "glitch" --- that's the magical word that was used no less than three times in WOOD-TV's coverage --- in the Diebold optical-scan system used for the first time in Barry County, Michigan's election yesterday forced Elections Officials to count all ballots by hand. Since it was an optical-scan system --- which uses paper ballots --- they were able to do so. That would have been next to impossible had a similar disaster befallen a touch-screen system with "paper trails" and completely impossible on a paperless touch-screen machine.

All seemed fine throughout the day on Barry County's new voting machines until the optical scanner printed out the final results at the close of the election. The report was found to have had all matter of inexplicable totals including 0 votes for some candidates and no YES votes for any of the bond issues on the ballot.

The Barry County mess, as it's being reported by WOOD-TV, sounds almost identical to the situation in Leon County, FL last December where "hackers" had exploited a security vulnerability in Diebold's optical scanner memory card causing it to print results that were virtually the opposite of the true results on the paper ballots. The "hackers", who were computer security experts, had hidden all traces of their "crime" in that mock election test, so it would likely never have been discovered.

The problem affected 15 out of 16 townships in Barry County on machines which cost $4000 a piece and were purchased because County Officials claim the federal Help America Vote Act (HAVA) forced them to do so.

WOOD-TV covers the story, "glitch" after "glitch", with both text and a video reports. Here's a few details from their text report...