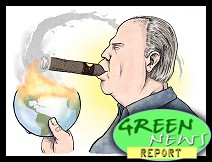 IN TODAY'S RADIO REPORT: Rush Limbaugh is Climate Change Misinformer of the Year!; ABC News buys into light-bulb "ban" baloney; Illegal logging leads to a thousand dead after devastating floods in the Philippines; Meet the World's Newest Oil Spill, now back in the Gulf of Mexico; PLUS: Turning the scheduled-corner in the Fukushima nuclear disaster? ... All that and more in today's Green News Report!


They also say the milestone of a cold shutdown, necessary before dismantling can begin, means less than usual because the nuclear fuel at three of the plant's reactors has melted and some of it has apparently escaped the reactor vessels.

I had to laugh.

Alden Griffith | December 6, 2011 at 5:15 pm Why not just exclude time and look at the residuals? When you regress against MEI (and nothing else), notice two things. First, the fit is not statistically significant at all (taking autocorrelation into account). Second, the *sign* is wrong. That tells you that leaving out the linear trend causes its variance (which dominates the variance of the temperature signal) to overwhelm the influence of MEI.

Um. In case you missed it, sign indicates whether co2 causes warming....or cooling.

I really get sick to death of the propaganda campaign misrepresenting all thought in one box of religious creationists 'denying science'. Why then are there so many physicists saying that oversimplification and a wish to prove a predetermined result are overwhelming Scientific Method and the need to review all possibilities when establishing theoretical models....which are research tools, not political footballs.

Grist promulgated a typical list of Talking Points which would have done credit to Karl Rove. For 2 years now I have been tracking the progress of the non debate as it morphs into new forms from Anthropogenic Climate Change to Climate Science to Climate Wierding. Resistance to overwhelming positioning of other thought by mainstream media in the UK has brought out allegations of a BBC alarmism campaign spanning 3 decades. I even saw Tony Blair listed among promoters of this bumph along with Prince Charles. You might recall Mr. Blair as involved in the false Iraq WMD scam promoting the Iraq invasion : a crime against humanity.

I kept a file of the ludicrous misrepresentations whipped up against 'dissent' which was unfortunately destroyed. Climate in Contention reconstructed is therefore missing the real evidence of Framing Arguments Poisoning the Well / Strawman Argumentation and sites - according to the script - bamboozled by and tools of polluters.

I call Bullshit. Not that Global Research.ca and CFACT should not at least give one pause, but there is so much more.

Here's my latest - though exploring Youtube, Current TV, etc. would give evidence that many think the Hoax is defeated.

Thanks for your comment, opit, but if you have done any real study of the overwhelming scientific evidence, you will know that the basic physics of the interaction of C02 with solar radiation is well established and not in dispute, as is the basic chemistry of C02 interaction with sea water (which, I notice, none of your comment addresses ocean acidification).

FYI, the American Geophysical Union, just like every major scientific & research organization and every national scientific academy in the entire world ALL support the overwhelming scientific evidence. The physicists who question the science are actually questioning the sensitivity of the system to forcings of excessive human carbon pollution above and beyond the natural carbon cycle --- they do not question the basic physics.

For anyone genuinely interested in the overwhelming scientific evidence from actual scientists and physicists, please go to Skeptical Science.com, where every denier argument is fully debunked with full primary scientific data.

Another oil spill by the drill baby drill mob.

All about the Environment and Global Warming seems to have gone on the back burner since the Economic Fiasco. I hope that it’s bought back in the forefront by the major media asap.
Michelle