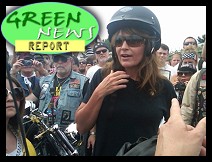 IN TODAY'S RADIO REPORT: Facing the aftermath of disaster in Joplin; Typhoon Songda hits Japan (Fukushima spared); Germany to dump all nukes; Rise of the emissions - now the highest on record; PLUS: Saudi Arabia really wants you to have lower gas prices ... All that and more in today's Green News Report!


"All cities are different, but a lot of the solutions and the problems are similar. There isn’t one large city in the world that doesn’t have traffic problems, that couldn’t be more efficient in its use of electricity, that isn’t trying to improve its waste systems. The leaders come together to share ideas on waste, bus transit systems, travel demand management."