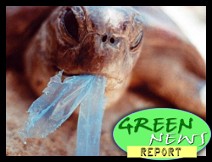 IN TODAY'S AUDIO REPORT: Your weather says cold, but your climate (and NASA) says HOT; Oil, oil, toil and more trouble; Plastic bag taxes --- do they work? ... PLUS: The Big Murkowski: Will Alaska's Senator block the EPA from enforcing the Clean Air Act? ... All that and more in today's Green News Report!

What If All US Dairies Were to Go Organic?

The item Shortbus links to above is a great overview of the attempts to weaken organic standards so that big agribusiness can continue with Business As Usual and crowd out REAL organic dairies. Thanks for the link!