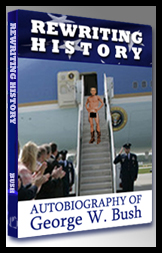 The White House propaganda office invited a few of George Bush's remaining supporters in the media --- second- or third-tier rightwing columnists like Jonah Goldberg and Kathleen Parker --- up to the Oval Office last week for an audience with his nibs.

During the mostly off the record meeting, Bush apparently doled out campaign-style spin that he purported to be the real stories behind issues in the news --- deep background info that would set his critics back on their heels and boost his pathetic poll numbers, if it weren't, you know, top secret. Classified. Hush-hush.

No, if the public wants to know what Bush has really been up to since Inauguration Day 2001, they'll just have to wait to read his book --- or at least that's what he told the group, according to Jonah Goldberg, who reported it in his Los Angeles Times column:

"When I write my book," the president teased, people will understand how much behind-the-scenes diplomacy went on during this administration. I'm sure he's right. In fact, if only a fraction of what he had to say was remotely accurate, then the conventional bleats about unilateralism, war lust and cowboyishness will go down in history as the excessive caterwauling of an imaginative and hyper-partisan opposition. (Emphasis added.)

Of course, "if only a fraction" of what Bush has said on the public stage had been "remotely accurate," he would not be widely considered America's Worst President Ever.

Kathleen Parker, a columnist who is little-known outside rightwing circles, provided some flavor from the meeting:

Bush is dressed in a blue suit and sits slightly slouched in an armchair. The rest of us, journalists and staff, take seats among chairs and couches that form a loose circle, while a server offers tall glasses filled with ice water or Diet Coke.

As Bush talks, he scratches his head, noisily chomps his ice, and occasionally flutters his lips with a loud exhalation the way horses do. Is that a snort or a nicker? Whatever the technical term, it sounds like frustration mixed with ennui.

As in, how many times do we have to go through this? We're at war. An ideological struggle. A fight for civilization. Et cetera, et cetera. Despite his insistence that he is "sprinting toward the finish," Bush seems weary, if also characteristically optimistic.

Is he completely out of touch with reality, as Bush-bashers insist? Or does he know something the rest of us don't?

In the absence of any evidence to the contrary over the past seven and a half years, it's a bit shocking that anyone could speculate about whether George W. Bush is out of touch with reality.

On the other hand, Bush dead-enders can't be blamed for holding onto the hope he'll prove them right in the end. After all, they put their collective credibility on the line for him --- not just cheerleading for him and his policies, but casting aspersions on the patriotism of anyone who dared point out the obvious fact that the emperor, their Dear Leader, had no clothes.

Now they appear to be pinning their hopes for redemption on a book George Bush will hire someone else to write, in which he'll finally reveal all and set everything to right, retroactively turning all his blunders into brilliant strategies and lies into truths.

It's more likely his new book will be a sequel to his ghost-written, falsehood-riddled campaign autobiography, A Charge to Keep --- suggested title, Rewriting History.

READER COMMENTS ON
"Bush Holds Court Off the Record With Rightwing Columnists"
(9 Responses so far...)

"After 8 Years with no Clothes, Now I'm Gonna Play Cowboy!"

Will it be like OJ's, "If I Did It"? The title will be something like this."If I Did Some Of The Things You Think I Did, This Is How I Did It".

I keep asking this: How can these R-Wing blowhards claim the audience they claim when the Admin they shill for has a sub 25% approval rate? Like the weird vote numbers, I suspect that something stinks in the ratings. See how they (Fox and others) leveraged supposed viewership/listener numbers to get the other news outlets to run scared? I suspect a bluff with bad hand (a poor mix of cards) all along. Wealthy media owners (Murdoch and Clear Channel) forced those shows as the only voice to much of the country.

This lazy sumbitch will need a ghostwriter. I suggest Stephen King.

That book will be the first one added to his presidential library. It'll fit perfectly considering the whole purpose of that library is to rewrite history and house pro-Bush materials and a pro-Bush think tank.

The AutoLIEography of George W. Bush

Read the comments...over 123 of em, most of em highly critical of the Neocon gassbag Jonah.

I hope his book comes with a free set of crayons... or do you think it'll be a pop-up book? I can't wait!