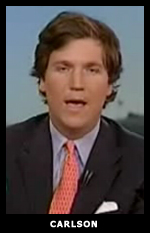 Among the most annoying affectations of Tucker Carlson, the conservative host of MSNBC's afternoon gabfest, "Tucker," is his habit of feigning confusion by crinkling his nose, scrunching his brow and saying "I'm confused," before launching into a discourse about something a Democrat has done --- about which he is not really the least bit confused.

I wonder if he crinkled his nose like that and said, "I'm confused," when MNBC told him his show was canceled:

"It was a good show. I'm proud of it," Tucker Carlson tells TVNewser about his now-canceled MSNBC daily program, which began in 2005.

Carlson says the show — with his conservative perspective — is not a fit for the MSNBC prime time 'brand'. "Which of (the programs) is not like the other? That was always the feeling I got, watching the lineup...

"You can only really be who you are. I couldn't pretend to be something else, not that anyone asked me to be somebody else. I was kind of out there, by myself."

Since word of the cancellation, he says, "They've been really nice to me...I like working for NBC. They want me to stay, and I'm going to stay, so I can't complain."

"Sometimes when you fail," he adds, "you feel embarrassed. I really don't feel like we failed."

Carlson, who is a descendant of the founder of the Swansons frozen food empire and whose great-uncle was J. William Fulbright, will remain with MSNBC as senior campaign correspondent.

« PREVIOUS STORY "DoJ a No Show at Congressional Hearing on 'Voter Fraud'"
» Go to The BRAD BLOG front page «
"Poll: Success for Bush - Iraq Is Out of Sight, Out of Mind" NEXT STORY »

His specialty was majoring in the minors.

Tucker is not the only one not immune from decently presenting facts. The House Judiciary Committee, now back on track, has not only thwarted unjust retroactive immunity, but is chipping away at current fascist doctrines infesting the courts:


Accordingly, we support a resolution that would, notwithstanding the state secrets doctrine, authorize relevant carriers to present fully in court their claims that they are immune from civil liability under current law, with appropriate security protections to carefully safeguard classified information.

(The Gavel, emphasis added). Friends, that is BIG! The ill advised activist judge created state secrets doctrine (pure fascism) is a cancer on our nation's justice, and the telecoms are certainly carriers of that disease.

The good sense of Conyers is back and we got your back!

Tucker is a pompous, arrogant, illiterate windbag with little of anything to say! The airwaves were better without him!

Tucker has no one to blame but himself. I remember watching his Katrina reporting. That boy grew up a bit then; it was decent reporting from a shell shocked member of the band wagon. He did change after that, his bow tie cute style lost its innocence. His reporting from New Orleans was tempered and sedate and even professional. He didn't ever recover frankly because Tucker has something Tony Snow doesn't have (I'll let you all mull that one over). His style and his show should have reflected that spirit he demonstrated in New Orleans; instead, he chose to play a part and continue his show unchanged; yet its vigor was lost.
Mr. Carlson ( I prefer Tucker), states, "You can only really be who you are. I couldn't pretend to be something else...". I believe he did pretend towards the end, and his heart (especially regarding this Administration) was no longer in it.
I rarely and I do mean rarely agreed with Mr. Tucker and I write this without rancor or even disdain. I can't help but admit that I enjoyed his show at times and hope that he returns one day. Returns as the man that this experience will afford him.

I agree Dredd! This IS big. Some Republican was complaining in the hearing today that they weren't allowed to give any input in the House bill and Conyers stood up to say that no Republicans showed up to give their input. It's really pathetic. They keep bringing up 911 when everybody knows Bush requested the wiretaps months before 911.

Tuckers mom must have died, so now he doesn't get a part in the play. Oh, dear.

« PREVIOUS STORY "DoJ a No Show at Congressional Hearing on 'Voter Fraud'"
» Go to The BRAD BLOG front page «
"Poll: Success for Bush - Iraq Is Out of Sight, Out of Mind" NEXT STORY »
See MSVL and support BRAD BLOG! Click here for signed premium version!