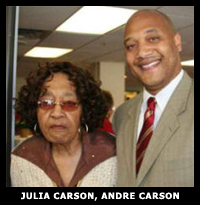 And no, the first Muslim was not Sen. Barack Obama. It was Rep. Keith Ellison (D-Minn.). Now there are two:

Indiana voters on Tuesday elected a Muslim to Congress, only the second of that faith chosen in U.S. history.

Andre Carson, grandson of the late Democrat Rep. Julia Carson, was elected to serve the balance of her term in the U.S. House of Representatives in a special election.

She died in December 2007, after serving 11 years in the heavily Democratic district.

The younger Carson, 33, a member of the Indianapolis City Council who converted to Islam about a decade ago, will serve out the remainder of his grandmother's term through calendar 2008. He beat Republican Jon Elrod and a third party candidate with 52 percent of the vote to 44 percent for Elrod.

Ellison was sworn in on a copy of the Koran owned by Thomas Jefferson. No word yet if it will be used by Rep. Carson.

« PREVIOUS STORY "There Are Two 'Big States,' Not One, With Primaries Upcoming - N.C. Votes on May 6"
» Go to The BRAD BLOG front page «
"DoJ a No Show at Congressional Hearing on 'Voter Fraud'" NEXT STORY »

Will Glen Beck ask him if he's going to bomb something?

Obama is not a muslim, he is a christian. I like him a lot anyway.

I heard Ellison had gotten sworn in with Jeffersons copy...the Wing Nutz were ready to make a big stink about it until they heard that

Part of Obama's early speech disturbed me. To preachy in my opinion. That plus the myspace fiasco made me NOT want to support Obama. However at this point with the only candidates left being Obama vs. Hillary, I have to side with Obama as the lesser of the two evils. The real issue for me is his AIPAC / PNAC / CFR affiliations and can he break away from those three gangs.

"And no, the first Muslim was not Sen. Barack Obama. It was Rep. Keith Ellison (D-Minn.)"

Obama is not Muslim . Why do you post this BS ?

« PREVIOUS STORY "There Are Two 'Big States,' Not One, With Primaries Upcoming - N.C. Votes on May 6"
» Go to The BRAD BLOG front page «
"DoJ a No Show at Congressional Hearing on 'Voter Fraud'" NEXT STORY »
See MSVL and support BRAD BLOG! Click here for signed premium version!