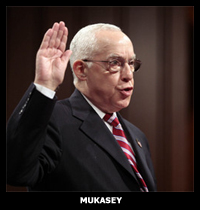 The White House is blocking efforts by special prosecutor Patrick Fitzgerald to present evidence he collected in the CIA Leak investigation to the House Oversight and Government Reform Committee, according to the committee's chairman, Henry Waxman (D-CA).

Prompted by Scott McClellan's statement last month asserting that top White House officials, including George Bush and Dick Cheney, were complicit in an effort to deceive the public about the leak, Rep. Waxman has written to Attorney General Michael Mukasey urging him to convince Bush to release the evidence.

In his letter, Rep. Waxman points to a precedent from the Clinton administration:

Of particular interest are Fitzgerald's notes from his interviews at the White House. If either Bush or Cheney gave statements that contradict McClellan's, a new investigation would likely be triggered. Lying to federal prosecutors is a felony.

I am writing to seek your assistance in the Oversight Committee’s investigation into the circumstances surrounding the leak of the covert identity of CIA officer Valerie Plame Wilson. As the recent disclosure from former White House Press Secretary Scott McClellan underscores, there remain many unanswered questions surrounding this incident and the involvement of the President, the Vice President, and other senior White House officials in the security breach and the White House response.

I hope you will not accede to the White House objections. During the Clinton Administration, your predecessor, Janet Reno, made an independent judgment and provided numerous FBI interview reports to the Committee, including reports of interviews with President Clinton, Vice President Gore, and three White House Chiefs of Staff. I have been informed that Attorney General Reno neither sought nor obtained White House consent before providing these interview records to the Committee. I believe the Justice Department should exercise the same independence in this case.

Equal application of the law means that there should not be one standard applied by the Justice Department to congressional investigations of Democratic administrations and another standard applied to congressional investigations of Republican administrations. I ask that you personally look into this matter and authorize the production of the documents to the Committee without any further delay.

On March 16, 2007, the Committee held a hearing to examine the leak of Valerie Plame Wilson’s covert identity. Witnesses at the hearing included Ms. Wilson; James Knodell, the Director of the White House Security Office; and William Leonard, the Director of the Information Security Oversight Office at the National Archives.As I announced in my opening statement at the hearing, the purpose of the Committee’s inquiry is to examine three questions:

This document request sought seven categories of documents.Some of the requests, such as the request for “[d]ocuments Other requests asked for enumerated documents. One important request sought: relating to the existence or systems at the White House to ensure that classified information would be protected,” require the Special Counsel to conduct document searches.

Transcripts, reports, notes, and other documents relating to any interviews outside the presence of the grand jury of any of the following individuals:

According to a Justice Department official, Mr. Fitzgerald has also designated for production to the Committee reports of interviews of certain White House officials. However, to date, four months after the Committee’s request, he has been unable to produce these documents to the Committee because the White House has not consented to their production. Committee staff has asked Justice Department staff to provide, but has not received, a date by which the White House will determine whether it will allow Mr. Fitzgerald to produce the documents.

There is no legitimate basis for the withholding of these documents. Mr. Fitzgerald has apparently determined that these documents can be produced to the Committee without infringing on his prosecutorial independence or violating the rules of grand jury secrecy. As records of statements made by White House officials to federal investigators, outside the framework of presidential decision-making, the documents could not be subject to a valid claim of executive privilege.

· Erskine Bowles (Chief of Staff to the President)

· Mack McLarty (Chief of Staff to the President)

· Leon Panetta (Chief of Staff to the President)

· Roy Neel (Chief of Staff to the Vice President)

· Jack Quinn (Counsel to the President)

· Steven Ricchetti (Deputy Chief of Staff to the President)

· Harold Ickes (Assistant to the President)

· Doug Sosnik (Assistant to the President)

In the case of the Clinton Administration interview records, former Attorney General Janet Reno made her own determination that they were relevant to the Committee’s inquiries and produced them to the Committee. I understand that she neither requested nor received White House approval before transmitting the documents.

The Committee is conducting a vitally important inquiry into whether the White House followed the required safeguards in protecting Ms. Wilson’s identity and responding to an exceptionally serious breach of national security. As Mr. McClellan, the former White House Press Secretary, now asserts:

I had unknowingly passed along false information. And five of the highest ranking officials in the administration were involved in my doing so: Rove, Libby, the Vice President, the President’s chief of staff and the President himself.

I recognize that President Bush and his counsel may not want this information provided to Congress. But the role of the Attorney General is to administer the laws with impartiality. The Justice Department provided the exact same information to Congress during the Clinton Administration. There is no special standard for President Bush that exempts him and his senior advisors from responsible congressional oversight.

If you have any questions regarding my request, please contact me personally or ask your staff to contact David Rapallo or Theodore Chuang of the Committee staff at (202) 225-5420.

« PREVIOUS STORY "Bush Re-hires Wolfowitz, Puts Him in Charge of Arms Control Advisory Board"
» Go to The BRAD BLOG front page «
"VIDEO: 'Iraq Is Not A Top Issue To Republicans' According To CNN" NEXT STORY »

This is the straw to bust these criminals back.

How can our nation forgive the number one impeachable offense TREASON!!!

When they outed Plame they intentioanlly destroyed Brewster-Jennings, a decades old covert cia front company that took millions of our tax dollars to create. It was our nation's best source on hard to get intelliegence on Iranian and Iraqi nuclear weapon acquisition, proliferation, and development. They did his to stop ethical Plame and her operation from disputing their current Iranian weapons lies.

You've got to hand it to Bush/Cheney for thinking ahead to their next illegal war. The traitor bastard war criminals must be prosecuted, waterboarded, have their testicals shocked, attacked by dogs, kept cold and wet, sleep deprived, buggered and sent to the jail in Syria.

But will this go anywhere?

Or is it another in the long line ow Waxman and Conyers' investigations with useless subpoenas that seem to go nowhere?

Would it just be easier if some new laws were passed.

A "States Secret" can not be a cover for "domestic" terror, coercion, or politics by the current administration against the public.

If a President, Senator, or other sworn official should break his oath of office, he must be swiftly (that means quick, no delays at all) removed from power, and his security clearances (if any) removed immediately. If some crime or felony was committed he will remain in prison until prosecuted for that crime.
This is not to be confused with the current way of going through impeachment process. This is to make examples of those who would abuse power and trample the constitution, and national security.

I'm sorry. I can't even read this post. The title is such a knee-slapper I keep falling off my chair and rolling on the floor. My sides hurt from all my trying to seriously read this post. I give up. It can't possibly say anything to override the title anyway....

Yep. The only improvement I can think of is "Hen asks Fox A to make Fox B stop lickin the chickin"

... these demoCons are becoming pathetic.

And they haven't even come close to the "more than 10 million" White What House emails that were intentionally deleted in violation of federal law to coverup the crimes of the preznit blush gang.

And what ever happened to the "Phase II" investigation of lies leading up to the Iraq invasion which was supposed to be done by Chairman Rockefeller (D-Republican)?

Our government has failed us even to the depths of our homes.

Meanwhile the demoCons seem to have forgotten why they were elected. Could it be that they are jealous of the title "the Chimp" based on new scientific knowledge:


But when the numbers were displayed for just four-tenths or two-tenths of a second, the chimp was the champ. The briefer of those times is too short to allow a look around the screen, and in those tests Ayumu ["the Chimp"] still scored about 80 percent, while humans plunged to 40 percent.

That indicates Ayumu was better at taking in the whole pattern of numbers at a glance, the researchers wrote.

"It's amazing what this chimpanzee is able to do," said Elizabeth Lonsdorf, director of the Lester E. Fisher Center for the Study and Conservation of Apes at the Lincoln Park Zoo in Chicago.

Amen. It sounds as though Henry
Waxman is about to "hoist Mukasey on his own pitard."
And hopefully, he will twist Muk in the wind.

But there is always the wink and a nod. Mukasey
will say yes, and Bush will say no. And this routine
will go on for weeks.And who will adjudicate --the Supremes? So as they say --"don't count your chicks...

Perhaps, we will find out why Mukasey took this job. No one ever asked him at the hearing. Odd.

« PREVIOUS STORY "Bush Re-hires Wolfowitz, Puts Him in Charge of Arms Control Advisory Board"
» Go to The BRAD BLOG front page «
"VIDEO: 'Iraq Is Not A Top Issue To Republicans' According To CNN" NEXT STORY »
See MSVL and support BRAD BLOG! Click here for signed premium version!