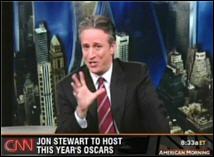 The L.A. Times is reporting that Jon Stewart will be named as host of the 78th annual Academy Awards.

Stewart is expected to take a week off from hosting The Daily Show to prepare for the Oscars.

I NEVER, EVER watch the Academy awards - however, this year I'm tempted to tape it just to skip to the parts with Jon Stewart.

WooHoo!!!
Great choice! He's one of my heros, too. I love the way he is so unfailingly polite as he skewers his guests, oh so gently & cheerfully & with very little blood, like a comic surgeon. Only the ones who NEED skewerin' of course!
GO JON!!!

By the way, any clip of Letterman & O'Reilly the other night??? I missed a good one, apparently!

Goddamnit! He just got back!

Why can't he do both? Okay I am being totally selfish here and I am sorry.

Maybe he can skewer Bush, O'Reilly, Cheney, Rumsfeld, Rice, et al in front of a larger audience. Because that would totally make it worth it.

To answer my own question, thanks, Crooks & Liars for having the Letterman video up:
http://www.crooksandliar...om/2006/01/04.html#a6571
Maybe 6 or 7 of us could send thank you notes to Dave for having cojones!

I have always liked Letterman but he just went up 10 fold in my books. As for Jon Stewart hosting the Academy Awards, that is probably their best choice in years (other than, of course Billy Crystal).

There was one year that Billy Crystal hosted that was just hysterical. I think he hosted more than once, but that one was the BEST! The Silence of the Lambs one, maybe?

Jon is the best. Don't watch the hollywood bullcrap of the rich who never work an honest day in their lives, making more in 1 day for showing boobs or just smiling, than I do slaving away at a real job for an entire year (which I think is an opinion shared by more and more and a reason why Hollywood is far from what it used to be), but what an excellent choice!

Sorta wonder if they have given him guidelines and boundries?? Can't imagine they would just say "show up and make people laugh, even if it's at the expense of our shameful, dishonest, government-wanna-be administration, just like you do on your show"! ...we can hope though

"Can't imagine they would just say "show up and make people laugh, even if it's at the expense of our shameful, dishonest, government-wanna-be administration, just like you do on your show"! ...we can hope though

This may be true but at the same time the administration is constantly making fun of itself. It's like a circus and they're all jumping thru hoops to try to one up each other on the idiot front. I think the best thing about Jon is that he is a no bullshit type of guy that just happens to be hilarious.

I remember seeing one time when he had a Republican Senator, I think John McCain, on his show and McCain said something to the effect of I'm sorry to have come on this show and Jon said well I'm sorry for having you. I wish I could remember exactly what the comment was but I remember LMAO. He could be a contender for Billy.

Thanks so much! Now I can see it. Everywhere else only had realplayer. I refuse to load real on my computer ever since they realeased Real One and it removed all the previous real items I had paid for. Took 6 months to find an mp3 converter wich would convert the real mp3 files I had made but wouldn't work on other players.

You're welcome, Blue! It's a hoot.

After numerous rounds of "We don't even know if Osama is still alive," Osama himself decided to send George W. Bush a letter in his own handwriting to let the President know he was still in the game.

Bush opened the letter and it appeared to contain a single line of coded message:

Bush was baffled, so he e-mailed it to Condi Rice. Condi and her aides had no clue either, so they sent it to the FBI.

No one could solve it at the FBI so it went to the CIA, then to the NSA.

With no clue as to its meaning they eventually asked Britain's MI-6 for help. Within a minute MI-6 cabled the White House with this reply "Tell the President he's holding the message upside down."

The last time the AA were worth watching was when Michael Moore was up for "Bowling" . He's the only reason I watched and he didn't disappoint. Now I have a reason to watch the entire show.

My wife commented to me when we found out last night though "Are they crazy? Are they looking for a fight?" My answer was "I hope so." I hope they don't keep him on a short leash.

Reminiscing on the Crossfire with Tucker Carlson, I have to say "Jon. Please be our monkey. Dance for us."

I hope he keeps his audience posted on how short a leash they plan to keep him on.
I hope they don't say "Great job on Tucker's show, Jon, but you can't do that HERE!"

What a funny game it is trying to get someone to do the emcee work without making anyone pout.

They have had to put a governor on it ... censor hints and clues ... in the past.

Is it a reflection that we are becoming more emotional in the partisanship, or is it just that celebs can't handle it?