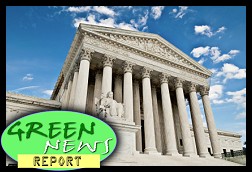 IN TODAY'S RADIO REPORT: Breaking: U.S. Supreme Court to hear challenge to EPA greenhouse gas emission regulations; India dodges a bullet with Super Cyclone Phailin, while Fukushima prepares for another; 800,000+ gallon oil spill in ND; Government shutdown shuts down US Antarctic research program; PLUS: Glimpse the future with the latest winners in solar cars and solar houses ... All that and more in today's Green News Report!

IN 'GREEN NEWS EXTRA' (see links below): Treaty curbing mercury emissions now international law; USA Today "balances" hundreds of scientists with fossil fuel-backed group; A way to full solar energy deployment; A warning for the US Southwest - it's gonna get a lot hotter; Light at the end of the tunnel for fusion energy research?; Study: climate may be even more sensitive than we thought; BP pleads guilty to negligence in TX refinery pollution, but absolved by jury; Which is better: plastic or compostable plastic?; US court hands win to Keystone XL pipeline supporters; Arizona solar plant generates electricity at night ... PLUS: Denial As a Way of Life: Climate denial is closely related to debt-ceiling denial ... and much, MUCH more! ...

Sarah Palin can see a "hurricane" from her house today.

[Ed Note: Comment by "Phil" deleted. He has been warned several times about posting under different names, in violation of our very few rules for commenting here at The BRAD BLOG. Unfortunately, due to those repeated violations, even after several warnings, he is now banned from commenting here.]

Gee, "Naked IPCC", that's pretty underwhelming. Do you have any scientific evidence from any actual scientists overturning the basic physics and basic chemistry of global warming and the impacts of climate change? Surely you are aware that the IPCC is panel of hundreds of scientists, and that they synthesize and summarize the primary literature of the last several years for their report. If you have issues with the procedures or jargon of the IPCC --- typical among large, democratically-run organizations with input from scientists and policymakers --- but administrative issues don't negate, overturn, or otherwise refute the overwhelming scientific data that burning fossil fuels is driving the observed increase in global temperatures.