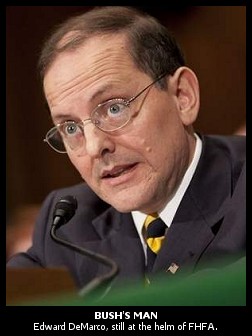 Last year, in a petition to President Barack Obama, the advocacy group Change.Org described Edward J. DeMarco, a holdover from the Bush Administration who still serves as Acting Directer of the Federal Housing Finance Agency (FHFA), as "the single largest obstacle to meaningful economic recovery."

The FHFA controls the government-sponsored mortgage giants, Fannie Mae and Freddie Mac, which own 60% of all mortgages in the United States.

Around the time Change.Org began circulating its petition, New York Times' Nobel Prize winning economist Paul Krugman, called for President Obama to "Fire Ed DeMarco". The blog detailed how DeMarco had, in defiance of the Obama Administration, rejected a U.S. Treasury Department request "that he offer debt relief to troubled homeowners --- a request backed by an offer that the U.S. Treasury would pay up to 63 cents to the FHFA for every dollar of debt forgiven."

Treasury's request was rejected even though, as Krugman explained, "a reduction in debt burdens would strengthen the economy," creating "greater revenues" that could "offset any losses from the debt forgiveness itself."

The fact that a Bush holdover, who, for so many years, has been committed to protecting the same Wall Street casino --- the market created out of mortgaged backed securities --- whose collapse triggered what Krugman insists is now a "depression", is primarily due to the ability of Senate Republicans to block both of the nominations Obama finally made to replace him...

Joseph Smith, whom Obama nominated to serve as the Director of the FHFA on Nov. 12, 2010, withdrew his nomination on Jan. 27, 2011 after Republicans, according to the National Council of State Housing Agencies, "prevented the nomination from coming to a vote in the full Senate" despite a 16-6 vote of approval by the U.S. Senate Banking Committee. A second nominee to the post has also been held up, so far, by Senate Republicans.

But for the GOP's ability to prevent nominations from coming to the Senate floor for an up-or-down vote, DeMarco would not have been in a position to block debt reduction in 2012.

That said, some of the blame must be shared by the President. Despite repeated occasions in which DeMarco defied his administration's policy on this core issue, no new nomination was made until May 1, 2013 when the President nominated Rep. Mel Watt (D-NC) to head the FHFA. That nomination came only after 45 members of the House, eight state Attorneys General and the advocacy group MoveOn.org joined the "Dump DeMarco" movement.

As a member of Congress, Watt had urged DeMarco to "enact principal reduction," though when his nomination came before the Senate Banking Committee, he avoided committing to a specific position on the issue, asserting a need for further study.

Last month, a temporary accord between Republican and Democratic leadership in the U.S. Senate --- struck in an effort to stave off the so-called "nuclear option" that might have done away with the filibuster --- paved the way for an up-or-down majority vote on several of the President's nominees, including Richard Cordray's long-standing nomination as Director of the new Consumer Finance Protection Bureau (CFPB). A vote on Watt's nomination to FHFA, however, was pushed back to September.

This month, with DeMarco still at the helm after all of these years, the FHFA sent a heavy-handed instruction to Fannie and Freddie, directing the two mortgage giants to "'limit, restrict or cease business activities' in any jurisdiction" that elects to use eminent domain as a debt relief tool. Moreover, Fannie and Freddie recently joined with Wall Street as parties plaintiff in seeking to have Richmond, California's unique use of eminent domain to seize underwater mortgages, restructure them and return them to home owners, declared unconstitutional.

That participation and heavy-handed directive comes during the fifth year of a housing crisis in which a number of states are still said to be "drowning in underwater mortgages." In some areas, such as Atlanta, 54% of mortgages are underwater. Those underwater mortgages and high foreclosure rates have devastated local economies and municipal solvency.

The depth and length of economic insecurity wrought by the very economic activities that DeMarco's heavy-handed directives seeks to perpetuate ought to provide the straw that finally pushes Senate Majority Leader Harry Reid (D-NV) to invoke the "nuclear option" on Watt's nomination. Until that happens, however, the GOP filibuster and DeMarco will remain what Change.Org described as "the single largest obstacle to meaningful economic recovery."

Cornell Law Professor Robert Hockett argues (see Bloomberg Law's discussion and video below), that while there are significant legal issues in the novel use of eminent domain being opposed by Wall Street, they are not insurmountable.

In the meantime, it doesn't seem to be legal hurdles which most concern DeMarco and his gang about this use of eminent domain.

Los Angeles Times reports that Fannie Mae Chief Executive Timothy J. Mayopoulos, whose annual executive compensation is valued in excess of $3.2 million, objects to the use of eminent domain as a debt relief tool because it "has the potential to unsettle investors in mortgage securities." The joint Fannie, Freddie, Wall Street lawsuit argues that the City of Richmond has illegally misused its eminent domain powers solely for the benefit of private homeowners.

It is a bit disconcerting to see Wall Street hiding behind "investor rights." Compare that to the April 2010 exchange between Sen. Carl Levin (D-MI), Chairman of the U.S. Senate Internal Affairs Subcommittee on Investigations and Daniel Sparks, former Mortgages Department Head at Goldman Sachs, pertaining to the fact that Goldman sold hundreds of millions of dollars in securities without advising their investors that Sparks' own staff regarded the sale as a "shitty deal."

The Wall Street lawsuit's suggestion that the only ones affected by mass foreclosures are individual homeowners reflects, at best, ideological blinders that prevent wealthy CEOs like Fannie Mae's Mayopoulos from recognizing the adverse impacts of mass foreclosures upon local economies and affected cities and counties in terms of declining tax revenues and direct costs to prevent civic blight. The "ideological blinders" descriptor is charitable. There is the prospect that Wall Street simply wants to keep its lucrative casino open for business, economy be damned.

As Hockett explains in the video below, while this particular use of eminent domain is new, the use of eminent domain to seize "intangible property" is not. The mere fact that cities and counties have had to resort to such a creative means to seek relief from the now five-year old housing crisis is but a testament to the failure at the federal level to address the source of our economic malaise --- a failure which, in turn, must be laid at the feet of the GOP and its radical misuse of the filibuster.

Bloomberg Law's recent discussion of the use of the legal issues involved in the use of eminent domain as a debt relief tool follows below...

I read this sentence...

"... ought to provide the straw that finally pushes Senate Majority Leader Harry Reid (D-NV) to invoke the "nuclear option" on Watt's nomination."

I had to double-check that I wasn't reading THE ONION.

"The joint Fannie, Freddie, Wall Street lawsuit argues that the City of Richmond has illegally misused its eminent domain powers solely for the benefit of private homeowners." That would be an inaccurate assertion.
The action by Redmond would be to help the individual homeowners AND help stabilize the local economy. It would free up people's ability to spend money which would lead to the local economy begin recovery. If no one has any money to spend because they are just making debt payments, and can no longer borrow to try to advance financially the local economy is stagnant at best. Isn't trying to improve the local economy one of the things that local and state governemtns are supposed to do?

But even if the statement was true, what's wrong with helping local homeowners at the expense of banks? The Emergency Economic Stabilization Act of 2008 was to help the banks at the expense (increased tax burden due to increased debt) of the tax payers. The act socialized the expense and privatized the benefits. What Redmond is doing is just the opposite: Socializing the benefits and privatizing the costs. If the banks can rig the laws to benefit themselves why can't the local governments do the same? Then maybe the banks would start acting in a cooperative way instead of an eminent domain way about the manipulation of the financial system (What's ours is ours, and what's theirs is ours, eventually).

But even if the statement ["eminent domain powers solely for the benefit of private homeowners"] was true, what's wrong with helping local homeowners at the expense of banks?

Without delving into it too deeply, "eminent domain" entails the ability of state and local governments "to take private property for public use."

In order to avoid a violation of the "Taking" clause of the 5th Amendment to the Constitution, the power of eminent domain may only be exercise for public use. In all such cases, the prior owner is entitled to just compensation, which ordinarily entails fair market value.

That, however, was broadly interpreted by the controversial 2005 Supreme Court decision in Kelo v. City of New London, which upheld the right of a city to take non-blighted private property, pay fair market value and transfer it to a private developer solely for the purpose of increasing municipal revenues.

The public benefit is far more apparent with Richmond's use of eminent domain as a debt reduction tool than the questionable use of redevelopment via eminent domain by the City of New London, that, at least in my view, entailed the enrichment of a local developer at great public expense with no real public benefit.

Can you imagine if a Clinton or Obama appointment were kept over for > 4 years by a Senate minority which prevented change? Can you imagine the media firestorm if Dems prevented a key change which held back the economy?

The Republicans are sickening and the media is often their accomplice.

America needs to be replaced DeMarco.

Oops, I miswrote the last sentence.