Senators Schumer, Feingold, Kennedy and Durbin are curious as to why it seems that Alberto Gonzalez lied about whether or not there was concern in the Dept. of Justice over the legality of Bush's domestic wiretap programming run out of NSA.

Gonzales testified in February of 2006 that there had been no such concerns, but the startling testimony of former Dep. Attorney General James Comey yesterday (video here) tells quite a different story, including a late-night trip by Gonzales and WH Chief of Staff Andrew Card to then-AG John Ashcroft's hospital room in hopes of getting his approval after Comey would not sign off the program. To his credit, Aschroft refused as well. Even after the White House --- apparently Bush himself --- called to inform him that Gonzales and Card were heading over.

The Senators sent the following letter today to Gonzales, reminding him of the apparent huge contradictions in his testimony as compared to Comey's, and to ask him for a "prompt response to the following question: In light of Mr. Comey’s testimony yesterday, do you stand by your 2006 Senate and House testimony, or do you wish to revise it?"

UPDATE: Bob Fertik at Democrats.com suggests it's either "impeach or jail" Gonzo. We'll not disagree. And based on Digby's as-always insightful comments on this, we'll guess she may not disagree either.

UPDATE 5/17: WaPo reports the reply from DoJ to the Senators letter. Their response essentially: the Feb. 2006 testimony is Gonzales' story and he's sticking to it.

The letter to Albert Gonzales from the Senators is posted in full below...

( 22 so far... )
Article Categories: NSA, Accountability, Dept. of Justice, James Comey
Former Deputy Attorney General Comey Testifies Before House Judiciary Committee
Yet Another Former DoJ Official Revealed to Have Nothing to Do with the U.S. Attorney Firings
RELATED? The Murder of Seattle Prosecutor Thomas Wales Was Barely Discussed in DOJ, Comey Testimony Suggests
By Margie Burns on 5/3/2007 1:47pm PT

*** Special to The BRAD BLOG
*** by DC Correspondent Margie Burns

Comey testifies --- and the logic of the process of elimination begins to set in. Even the congressional GOP may have to acknowledge that the Department of Justice was not the instigator in those weirdly self-destructive, unprecedented firings of several mostly Republican US Attorneys, mid-term, during a Republican administration. That was the impression I got while sitting in the hearing room this morning at the U.S. Capitol.

Former Deputy Attorney General James B. Comey testified at a hearing before the House Judiciary Committee’s Subcommittee on Commercial and Administrative Law this morning. Spending no time or ink on a prepared statement, Comey, who had been subpoenaed by the Committee, devoted approximately two hours to answering questions from the mostly Democratic members present. The hearing, which most GOP members skipped, was chaired by Linda Sanchez (D-CA).

As Judiciary Chairman John Conyers (D-MI) said in opening, “What we don’t know is who actually placed the names of the US Attorneys on the firing lists.”

Comey plugged up one hole: it was not he.

Unlike Attorney General Alberto Gonzales at a previous hearing, Comey did not testify under oath (a staffer for the Subcommittee explains that anyone who testifies to Congress is subject to penalty for perjury). Comey did, however, speak clearly and unequivocally. He said in answer to questions that, as Deputy Attorney General, he was the supervisor directly above the US Attorneys, and in response to key questions from Democratic members, Comey stated flatly that... 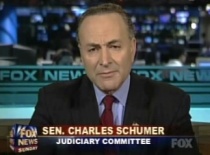 The New York Times reports that in 2004 Deputy Attorney General James Comey refused to sign off on renewal of Bush's warrantless NSA spying program. Instead of addressing Comey's concerns, Bush Administration officials took the desperate move of actually visiting Attorney General Ashcroft in the hospital to get his authorization for renewal of the program. Ashcroft was, at the time, in intensive care recovering from pancreatitis.

Comey refused to approve renewal of the program based on concerns over "whether the president had the legal and constitutional authority to conduct such an operation."

Mitch McConnel, who appeared along with Schumer, chastised The Times for continuing to report on details of the wiretap program. While Schumer said that any investigation should consider a possible whistle-blower status for anyone who leaked this information, Senator McConnel was more interested in punishing the whistleblower.

Because the NSA shared the wiretap information with many federal agencies, it will be very difficult to assign blame to a specific leaker.