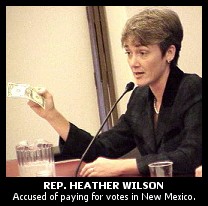 KEY BRAD BLOG ARTICLES IN THE SERIES SO FAR
(Newest articles at the bottom.)

3/4/08: Rep. Heather Wilson Accused of Felony Vote-Buying in New Mexico; Reporter Quits After News Director Scrubs Story
Republican Delegate Convention Attendees Paid by Wilson Senate Campaign, According to Report Sourced by Three Eye-Witnesses, Removed from Air After Complaints to Station by Wilson
Memo From News Director to Reporter: 'Don't you think if there was anything to it the bloggers would have picked this up?'

3/11/08: New Mexico's Corporate Media Covers Up the Coverage of GOP/Heather Wilson 'Vote Buying' Scandal
A Week After it Broke, the Albuquerque Journal Reports and Buries the Laura MacCallum Story, Demonstrating Again Why the Blogosphere is so Crucial...
-- Guest Blogged by Dennis Domrzalski