"This is 'Alice in Wonderland' gone amuck." 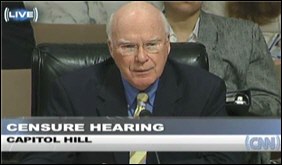 When Graham was questioning Dean he mentioned "during times of war", not realizing that Nixon was during time of war too.

Graham was saying now is different because we are now at war.

Dean pointed out to him that Nixon also used "national security" as a ruse for illegality.

I do not like to watch the video's here at work,where can I find the transcript to read at?

The transcript for Senator Leahy's statement is here.

Thanks for posting this, David.

"We know the president broke the law."