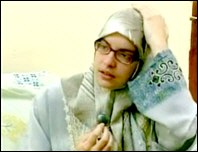 The Christian Science Monitor reports that Jill Carroll was not aware that the first (and most replayed) video taped interview would be broadcast in Iraq or internationally. In fact Carroll may not even been certain that she was free during the interview.

This video contain several clips. CNN's Nick Robertson opens with a quick report saying that Jill Carroll was not aware that the interview would be broadcast. Next, we have included the complete raw interview footage. Finally, Miles O'Brien interviews the editor of The Christian Science Monitor for some behind-the-scenes information about Carroll's state of mind during her initial release and during that first video interview.

Jill Carroll's kidnappers simply left her at the offices of the Iraqi Islamic Party (IIP) in the city of Amariyah. She had not been released to American or Iraqi officials at the time of the first interview.

Carroll was told that the interview would be for 'internal' party use. The IIP owns Baghdad TV so maybe it isn't surprising that they broadcast the interview.

Richard Bergenheim, editor of The Christian Science Monitor, that Jill Carroll's comments in that first video interview may have been constrained by the uncertainty of her freedom. Miles O'Brien interviews Richard Bergenheim on CNN American Morning:

Miles O'Brien: [In the interview, she was] really going out of her way to make a positive statement... tell us a little about the circumstance she was in at that point.

Bergenheim: ... She had been dropped of on the street. Someone pointed and said "go into that building"... She really wasn't sure what was going on and what her circumstance were.

She was told that if she spoke to Americans, entered the Green Zone or anything of that sort that her life would be in danger. I think it was likely that she was still in a careful measured frame of mind --- very careful of what she said.

Miles O'Brien: She wasn't certain she was free at that point?

Bergenheim: I think if I was Jill Carroll, just suddenly dropped of and said "you're free". It would be really hard to adjust quickly to what was going on.

I notice that when Ms. Carroll said she hadn't been mistreated, the Inside-the-Beltway propaganda machine retaliated instinctively. "Oh, yes you were."

They can't allow the free world to believe that we mistreat our detainees, but Islamic regimes do the opposite. Has to be the other way around, because we're the political embodiment of freedom, liberty, and all good things. Reality sucks, doesn't it, trolls?

We can't remember, can we, when the US President and Vice President were the ones advocating torture, while the rest of the world recoiled in shock.

I watched Bush's speech yesterday, and he still errs when he sums up what is happening in Iraq, and meanwhile Rice admits to thousands of mistakes (link here), but it will take the trolls years to catch up.

Bush equates the whole thing as "terrists" when everyone knows the insurgency is not al Queida.

And the insurgency is getting more politically saavy to let the captive go.

it is shocking how little time passed between Carroll's release and the bashing of her by the ghoulish wingnuts, when she did not follow their pre-conceived script of how a loyal American should speak after being released from a three-month ordeal.

Jill Carroll was not.

Scalia says that so-called "enemy combatants" are not protected by the most basic tenets of our Constitution, those truths that We The People held to be self-evident for every human being, except when they are not us.

Secretary Rice skirts that fine parsing line when she said that the U.S. does not torture on any foreign land --- and then a few days later, disturbing stories appear in the press that there may be torture occurring in planes in that unclaimed airspace over the Pacific. (well, it's not on land, after all....)

We are a 'nation of laws', except when we're not. President Clinton was not above the law, and George Bush is... because he says so.

Darn, I posted in the wrong place. Sorry. Carry on.

Things just don't add up. This whole story is so full of inconsistent facts. I guess when it all comes down to it, the no-names that took her were way over there heads and didn't know what to do.

You can tell they weren't the U.S. trained militants. Or can you...?

If they were US trained militants, she probably would not have been released.

Guiliana Segrena's story should not be forgotten in the continuing black bush scandals.

Jill Carroll didn't follow the script. So she had to be trashed. Oh gosh, are the right-wing think tanks and their media buffoons angry now.

SCRIPT: America promotes freedom. America doesn't torture or break international laws. America is a model for other nations to follow. America is good. People "over there" torture and commit terrorist acts against nice people (like us), and becasue they want to kill us, anything we do to them first is really self-defense.

REALITY: Almost the mirror image of the script.

and now, today, we find out the back story behind Jill Carroll's first statement.

anybody want to take bets on which wingnuts --- IF ANY --- will apologize for not only attacking her, but for being completely WRONG?

oh wait --- i forgot.... wingnuts don't apologize. slash-and-burn (a.k.a. slash and run) wingnuts don't make mistakes, ever, so there is nothing for them to apologize for.

When Patty Heartst returned from her "captivity" she had become one with her captors. People said it was proof she faked the entire kidnapping.
Of course, unlike Jill, Patty said she was raped & bound etc., & Patty's ordeal was a lot longer.
At the Hearst trial, a shrink said it's normal for a person to identify with & sympathize with your captors after being held a long time, psychologically, because the captors become your makeshift "family".
I don't know if that's what happened to Jill or if she spoke well of her captors because she was already sympathetic to their plight, in some respects, before she was captured.
But remember, they DID kill her interpreter when she was kidnapped & she WAS crying in one of the videos & held against her will.
How just fine is that? It's fine when you consider she could have been dead, in persepective.
Not wanting this entire episode to ruin her ability to continue to report on the Iraqi experience, may be a factor too. I don't know.
I wonder if her parents secretly gave her captors money?