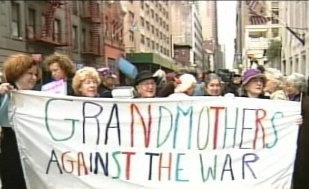 Bravo Raging Grannies! You are true Patriots.I am so proud of people who stick up for our rights.Keep protesting,it is your constitutional right. Things like this make me proud to be an American.

Funny.. arrested? You mean, after Bush just got done saying "it would be unpatriotic not to question your President during war"?

well, to be fair.. it wasn't Bush that arrested them... but, if any convictions are made, I wonder if Shrubby will pardon these women.. Hmm..

I guess he knows he looks like a total ass now, after his buddies have been raking Murtha over the coals all weekend. He knows that Jean Schmidts performance is going to bring his poll numbers down so he is backpedaling' quick. Trying to catapult the bs.

BEIJING - After fiercely defending his Iraq policy across Asia, President Bush abruptly toned down his attack on war critics Sunday and said there was nothing unpatriotic about opposing his strategy.

#3 Jo, is that called flip-flop, flip-flop, flip-plop. Oh, I almost forget, only the cons have a right to use this language. The rest of us are traitors. (ie: either with bush or with the traitors)

Go raging grannies, wish I could be their with you!

Sorry I don't know how to link, but this story is a hoot!

Regarding my post #4 meant to say terrorist. Bush has been so busy calling everyone names lately its hard to keep up with what we are from day to day.

It is good to know that peace is attractive no matter what our age or gender.

The one good thing about aging you realize history does tell the story. How many wars have been started over religion, greed, oil.

Guess what I can't understand is the blind following behind cowards, those who hide during Vietnam or in Cheney's case got 5 defferments.

So easy to send other people's children to fight for your greed and the repayment for campaign money.

Hell is too good for this group...I only hope there is a hell.

This is unrelated, but it is a beautiful story that I often share with my kids. Rest peacefully, Mr Anderson.

LONDON - Alfred Anderson, the last known survivor of the 1914 "Christmas Truce" that saw British and German soldiers exchanging gifts and handshakes in no man's land, died early Monday, his parish priest said. He was 109. His death leaves fewer than 10 veterans of World War I alive in Britain.

Anderson died in his sleep at a nursing home in Newtyle, Scotland, said Rev. Neil Gardner of Alyth Parish Church.

Born June 25, 1896, Anderson was an 18-year-old soldier in the Black Watch regiment when British and German troops cautiously emerged from their trenches on Dec. 25, 1914. The enemies swapped cigarettes and tunic buttons, sang carols and even played soccer amid the mud and shell-holes of no man's land.

The informal truce spread along much of the Western Front, in some cases lasting for days.

"I remember the silence, the eerie sound of silence," Anderson told The Observer newspaper last year.

"All I'd heard for two months in the trenches was the hissing, cracking and whining of bullets in flight, machine gun fire and distant German voices," said Anderson, who was billeted in a farmhouse behind the front lines.

"But there was a dead silence that morning, right across the land as far as you could see. We shouted 'Merry Christmas,' even though nobody felt merry. The silence ended early in the afternoon and the killing started again. It was a short peace in a terrible war."

The only person who is still focused on Bill Clinton is Rush Limbaugh. It's sad how that poor man can't seem to move on. Must be all those illegal drugs fogging up his brain.....tsk tsk

Sometimes I hear him while flipping through the radio dials. I just feel sorry for the poor pathetic man. Three (4?) failed marriages. No woman will have him. No children to love or to be ambitious for. His drug fogged brain still thinks Bill Clinton is president, as if he is still stuck in the the last century. His hearing destroyed from illegal drug use. I even heard he is incontinent now and must wear depends. So, so sad. The thought of him sitting alone in his soiled diaper mumbling about the past is enough to bring tears to my eyes. I will remember him in my prayers.
I am off to work now but I wish you all a great day!

Guess you won't ever be taking care of Rush, Dick, or George at the VA Hospital where you work. They talk up the glory of war however none of them are war veterans.

They are the Muthers of Veterans who copulate with Daddy Warbucks to produce Suffering Offspring whom they never visit.

Its a family affair.

We were talking about stupid Bushism's on an earlier thread. This is the stupidest thing that nit wit ever said.

Since we are tiptoeing down memory lane here, I just ran into this at another site and I thought "WOW! Castro would love this!" So happy thanksgiving dear here is a gift from me. :0)

"And now the liberals want to stop President Reagan from selling chemical warfare agents and military equipment to Saddam Hussein and why? Because Saddam 'allegedly' gassed a few Kurds in his own country. Mark my words. All of this talk of Saddam Hussein being a 'war criminal' or 'committing crimes against humanity' is the same old thing. LIBERAL HATE SPEECH! and speaking of poison gas... I SAY WE ROUND UP ALL THE DRUG ADDICTS AND GAS THEM TOO!..."

Thanks for finding this quote. Freakin' unbelievable how they flip flop and LIE, LIE, LIE.

1 hour ago
CAIRO, Egypt - Reaching out to the Sunni Arab community, Iraqi leaders called for a timetable for the withdrawal of U.S.-led forces and said Iraq's opposition had a "legitimate right" of resistance.

It pains me to report that the Limbaugh "quote" in #17 was apparently actually written by Aaron McGruder for a Boondocks strip that ran August 1, 2004. Sigh. See Snopes.com.

Must stop addiction to the killing
The meak will win if they are willing
Choose not a life of consternation
Distant cousin to evil libation
Use your conscience if you think you have one
Weapons of fear and mass destruction
Loose them all, make it your labor
Dominate yourself and not your neighbor
Control your anger and your sand dune
The truth you need is very near and due soon
Go write this message on the top
Stop war now, must stop, must stop