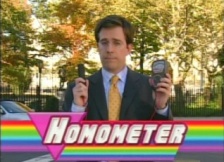 « PREVIOUS STORY "Uniting-Not-Dividing the World Over!"
» Go to The BRAD BLOG front page «
"Democracy Toon of the Moment..." NEXT STORY »

I saw that show..

I was laughing my ass off.. That guy that "refused to answer silly questions".. what a tool.. does he NOT understand that those are exactly the kinds of questions/propositions "anti-gay-rights" people are putting forward? I had a guy tell me "There's no way a man can love another man the way I love my wife. Letting 2 men get married lessens my marriage".. huh?

It's funny how all the religious fanatics are saying "it will ruin society" or "it will ruin marriage", yet there's no evidence to support their allegations.. And, in fact, places that are allowing "gay marriage" aren't showing any signs of "problems", other than in the minds of homophobes..

That was a good one.

I especially liked them pointing out that Massachusetts is last in the divorce rate. Ha ha! And red states are highest.

You got to love how Ed Helms gets to the heart of the matter. I just wished the MSM would do follow ups like this in a serious sense. Show all the radical right that there worst fears truly only lie in the White House and not in gay marriage

Good point, Jamie. Why isn't the MSM doing reports on how gay marriage in Mass. didn't change anything, and how they have the lowest divorce rate? Why am I even asking that question? The MSM is not the media anymore. The internet is. And the Daily Show is the real news, only with humor, which makes it better anyway.

Good point, Jamie. Why isn't the MSM doing reports on how gay marriage in Mass. didn't change anything, and how they have the lowest divorce rate? Why am I even asking that question? The MSM is not the media anymore. The internet is. And the Daily Show is the real news, only with humor, which makes it better anyway.

Who cares if gay people get married? I don't!

STEVE F: Go ahead and get married, see if I care!

So many points, so little time.

Never has a single word, "marriage," been the source of so much needless controversy and spewing of hate.

Really, that word is what this is all about. Both Bush and Kerry said civil unions are O.K., in Massachusetts and everywhere else. Gays and lesbians can live together as legally joined couples and enjoy all the benefits...property transfer rights, joint tenancy rights, even adoption of children.

Add the word "marriage" or "matrimony" and religious zealots go ballistic. Many clergy refuse to perform marriage ceremonies (which is their right). But the law has never required a religious service in order for a marriage (or union) to be legal. A ship's captain, a notary public, or even a mayor can perform a ceremony.

So let the person who performs the ceremony call it whatever he or she wants. "Marriage?" O.K.
"Civil union?" Fine. "Intertwining of Souls?" Why not? The important point is to guarantee that the couple has every right a heterosexual couple has.

Of course, this will mean Rick Santorum will have to find a new state to pick on. He might consider that one out in the desert where they're so crazy about marriage that some guys do it even while they're already married to somebody else (which is really quite uncivil, when you think about it).

Thanks for that link!

The 6 or 7 strike again! Hooray

The most accurate and most important news is found on the internet. However, the MSM still reaches the most people. Since the indictments of DeLay and Libby, the MSM has jumped aboard and the pressure is really on the BCFOL. The internet blogs lead the way but we still need the MSM to help make the change.

RLM, My problem with it being a "different name" is, it's a legal loophole for a lot of laws/situations that won't be "updated".. There's no rational justification for tweaking the definition of marriage to be between "a man and his property.. er a woman".. From a LEGAL standpoint, there should only be ONE term/institution that deals with a "couple" wanting to be legally "bound" to each other.. Marriage..

As you say, it's mostly a religious (and therefore, irrational) thing. Though, I know some people who aren't religious who are equally irrational about it.. Like the example I gave above about the guy that said 2 men can never share what he and his wife have.. yet, that doesn't explain -anything- about why that has -anything- to do with -his- marriage.. Again, irrational.. like any phobia.

What amazes me is.. I was talking with my Grandfather (he's 78) about Sept. 11, 2001 and the attacks. Explained to him all the information I had, the lack of a plane at the Pentagon, etc.. He was willing to listen to all of that, mull it over.. might even hit the net and try to find more info about it.. But when I brought up "gay marriage" he said "ok, I might be able to believe our Government attacked us to get us to war and to boost their power, but you will never convince me that gays should have equal rights".. He had no "reasonable" explination, and didn't want to discuss it at all.. Breaks my heart..

Sad that the mainstream media NEVER reports any news which could contribute to the dialog on gay issues. We have to go to the DAILY SHOW for this.

MMIIXX #8!!!!! Yahoo! Thanks for posting that link and MUCHO GRACIAS E&P!!! AND last but NEVER least --- THANK YOU BRAD for being so tenacious about the subject of our lost Voting Rights and Election FRAUD.

I thought it was odd that according to a poll taken this year by 50 state Survey USA, my state of Georgia (allegedly a RED state according to the vote count 2004), when polled on the pro-choice vs pro-life issue shows 52% in favor of "pro-choice" and 43% in favor of "pro-life." This has given me a pause. How can there be a 9 point difference --- remember how it was pointed out during the Presidential Campaign period as being the major issue for choosing a candidate for President? Holy Cow.!! It would be interesting to see if anyone has taken that list and compared it to election day weird anomalies. Keep in mind that Georgia has 100% black box voting machines installed.

Great piece in E&P. The facts are getting louder and more frequent. Keep up the pressure.

Thank you for the excellent work!

"Democrats cleaned up big in off-year elections from New Jersey to California, sinking the candidate who embraced President Bush in the final days of the Virginia governor's campaign. They also turned back all four of GOP Gov. Arnold Schwarzenegger's efforts to reshape state government. " (link here).

Thanks! I've been searching everywhere for that clip. Hilarious.

I didn't get my absentee ballot in in time, so I drove home (3 hours to Dallas from Texas A&M University - the most conservative school in the nation, but that's a different issue) to vote NO on proposition 2.