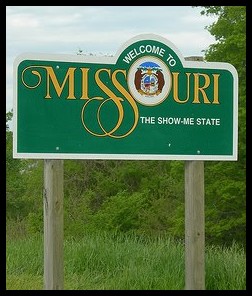 Missouri Republicans hope to work around a series of adverse state court rulings by way of a ballot measure that would amend the Show-Me State Constitution and require that citizens present state-approved Photo ID at the polls before voting.

The legislation to place the issue on the ballot was approved by the state Senate 24-8 last Wednesday. The next day it was adopted in the House 110-39. The wide margin in both chambers, likely enough to override a veto by Democratic Governor Jay Nixon, was the product of a purported "compromise" that would permit voters who can't obtain the necessary documentation to sign an affidavit to that effect and cast an otherwise normal ballot. The "compromise" language was struck after days of filibusters in the state Senate by Democrats.

But Republican State Senator Bill Kraus told PBS that the stipulation would be temporary and that Missouri could have "strict Photo ID" in the near future, once the state constitution has been amended to allow for it. It wouldn't be the first "Missouri Compromise" to go awry...

Solution in search of a problem

State Democratic lawmakers who bought into the "compromise" have ignored the axiom: If it ain't broke, don't fix it. According to MO's Democratic Secretary of State Jason Kander, since being elected in 2012, his office has not received a single complaint of in-person voter fraud --- the only type of fraud that can possibly be prevented by polling place Photo ID restrictions. In his legislative analysis, Kander asserted that "approximately 220,000 [lawfully] registered voters could be disenfranchised" by polling place Photo ID restrictions in the state.

While the "compromise" may have ameliorated the extent of disenfranchisement, as The Nation's Ari Berman observed last week, quoting Denise Lieberman of the Advancement Project, "a similar compromise" in North Carolina resulted in disenfranchisement because "information doesn't trickle down to voters, who will only hear 'photo ID is required.'"

Berman reports that the compromise in NC "failed to prevent widespread problems at the polls during this year’s primary, with poll workers wrongly telling voters they needed photo ID and administering 'spelling tests' to minority voters that seemed like the literacy tests of yesteryear. More than 1,300 ballots were rejected because voters did not provide the proper ID."

Thus, in buying into the "compromise," Democrats have agreed to an unnecessary "reform" that could result in widespread voter disenfranchisement.

Missouri Republicans have sought to impose these disenfranchising and, according to multiple Missouri state court decisions, altogether unnecessary, Photo ID restrictions for more than a decade. In Weinschenk v. State (2006), the MO Supreme Court struck down a GOP-enacted polling place photo ID law because it violated the Equal Protection clause of the MO Constitution which treats voting as a "fundamental right." A similar state constitutional provision in Pennsylvania led to that state's Supreme Court similarly finding that Republican-enacted polling place Photo ID restrictions violated the Keystone State's constitution.

In Minnesota, a Republican effort to enact polling place Photo ID as a state constitutional amendment was defeated by an "informed" electorate who, though the measure was initially believed to be popular, saw through the GOP's Big Lie" about pretend "voter fraud".

Republicans insist that such laws are necessary to prevent voter fraud. But, as detailed in sworn Congressional testimony by Justin Levitt (then a Loyola Law Professor, now an Assistant U.S. Attorney) in 2011, cases of in-person voter impersonation fraud are extraordinarily rare: nine possible cases out of more than 400 million votes cast. "Americans are struck and killed by lightening more often," Levitt observed at the time.

Later, in a 2014 update to his comprehensive investigation of all existing reports of "voter fraud" in the U.S. over the 14 preceding years, Levitt announced evidence of just 31 cases of the type of voter fraud that might have been deterred by Photo ID restrictions out of more than 1 billion votes cast since the year 2000.

Claims of this type of "voter fraud," according to the renowned, Reagan-appointed 7th Circuit jurist, Richard Posner, are but "a mere fig leaf for efforts to disenfranchise voters likely to vote for the political party that does not control the state government"...

Thus, we found Mike Turzai, Pennsylvania's Republican House Majority Leader, shamelessly boasting that unconstitutional polling place Photo ID restrictions would allow Mitt Romney to win the 2012 Presidential Election in the Keystone State. Earlier this year, Wisconsin GOP Rep. Glenn Grothman echoed Turzai's ill-considered remarks, declaring that his state's Photo ID restrictions were likely to give Republicans the edge in the Presidential race this November in the Badger State. In response, Todd Albaugh, the former Chief of Staff for the WI State Senate majority leader, revealed that he had left the state Senate and the party, after observing a number of GOP Senators who "were giddy about the ramifications" of their Photo ID legislation, "and literally singled out the prospects of suppressing minority and college voters" in the bargain.

Courts in multiple cases, both state and federal, have found that Photo ID laws disproportionately disenfranchise minority voters --- a conclusion that was backed by a 2016 U.C. San Diego study of ten strict Photo ID states that experienced "substantial drops" in voter turnout amongst African-Americans, Asian-Americans and Latinos after adoption of such measures.

Education is the answer

Our November 7, 2012 comments following the defeat of Photo ID at the polls in Minnesota bears repetition:

A little more than four months ago, when The BRAD BLOG first covered the ACLU's legal challenge to the deceptive ballot language that the MN GOP state legislature had used to describe its polling place Photo ID restriction initiative on the November 6 ballot, we expressed the concern that the legal challenge might succeed before the MN Supreme Court, yet fail in the court of public opinion. At the time, public opinion polls revealed that 80% of Minnesota voters favored the amendment. We were wrong on both counts.

In August, a divided MN Supreme Court rejected the ACLU's challenge to the language used in the ballot question. By late September, the once popular "Photo ID needed to stop voter fraud" scam had become well enough debunked by so many that, as we we noted at the time, support for the misleading measure in the Land of 10,000 Lakes had "cratered" in public opinion polls there. And, finally, yesterday, MN voters reportedly rejected the Photo ID amendment by a decisive margin of 54% to 46%.

In our original coverage, we cited Mark Twain's famous quip that "a lie can travel halfway around the world while the truth is putting on its shoes," and the pervasive failure of the mainstream media to expose the truth about the GOP's "Big Lie" about pretend "voter fraud." But we had underestimated the extent to which legal challenges to Photo ID and other forms of GOP voter suppression, especially in Pennsylvania, would compel MSM coverage and educate the public.

The public must be educated. They must come to understand the true purpose of polling place Photo ID. They must come to realize that the only thing that will be accomplished by this newly proposed amendment would be to weaken an existing state constitution that treats voting as a "fundamental right."

The Show Me State electorate should not only reject polling place Photo ID restrictions but the cowardly politicians who seek to prevail via voter suppression. Only time will tell if Missouri voters can be educated as well, and as quickly, as their counterparts in Minnesota.

Ernest A. Canning is a retired attorney, author, Vietnam Veteran (4th Infantry, Central Highlands 1968) and a Senior Advisor to Veterans For Bernie. He has been a member of the California state bar since 1977. In addition to a juris doctor, he has received both undergraduate and graduate degrees in political science. Follow him on twitter: @cann4ing

Once again, the Armed Forces ID of George Washington, Alexander Hamilton, and Henry Knox would not be enough to allow them to vote in certain States. And that is brought to you by the self-styled "conservatives" who consider themselves "patriots."