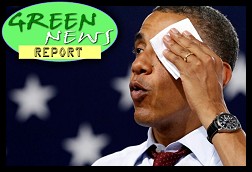 IN 'GREEN NEWS EXTRA' (see links below): Mercury levels rising in yellowfin tuna; State let oil companies taint drinkable water; IPCC: World has not woken up to water crisis caused by climate change; Saudis using oil to pry Russia away from Syria?; How fish could change the definition of 'organic'; Not enough time for geoengineering to work; One bacterium could save biofuel industry... PLUS: Fossil fuel companies gave Congress hundreds of millions to support Keystone XL... and much, MUCH more! ...

« PREVIOUS STORY "And Then There's That OTHER Dirty Canadian Tar Sands Pipeline Project [VIDEO]..."
» Go to The BRAD BLOG front page «
"The Biggest Winners of 'Citizens United'" NEXT STORY »

I always knew scarbough o was a creep.

but, the old man liked the girl. She's the daughter of which advisor? !

The genius of jerry and the folks

Scarborough is morphing into the realm of Oilah Akbar, as is Inhofe:


In 2012, Inhofe's The Greatest Hoax: How the Global Warming Conspiracy Threatens Your Future was published by WorldNetDaily Books, presenting his global warming conspiracy theory. He said that, because "God's still up there", the "arrogance of people to think that we, human beings, would be able to change what He is doing in the climate is to me outrageous."

(The Baby Is Not The Bathwater; The Guilty Are Not The Victims). According to Preacher Inhofe, all this climate change is the God of Inhofe at work to bring us catastrophe (one has to surmise from an analysis of his pronouncements).

That has to be the perfect picture of Obama for this post.