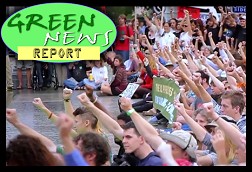 How are Burger King and ExxonMobil alike?


After years of preparation, ExxonMobil and OAO Rosneft have received the go-ahead to begin drilling a $700 million Arctic Ocean oil well in the Kara Sea. The well, which will be Russia’s most northerly, is to be the first of as many as 40 offshore wells planned for the Arctic by 2018.

The well will access a geological formation roughly the size of the city of Moscow. The formation is expected to contain roughly 9 billion barrels of oil.