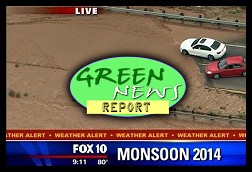 IN TODAY'S RADIO REPORT: Way too much water now falling on the Arizona desert; Another day, another toxic spill, this time in the Ohio River; New breakthrough recycles old car batteries into solar panels; Wind energy prices hit an all-time low in U.S.; PLUS: An innovative water wheel auto-magically cleaning up Baltimore Harbor ... All that and more in today's Green News Report!