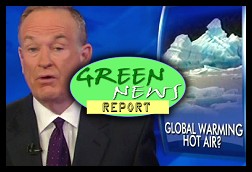 IN TODAY'S RADIO REPORT: Study finds CNN and Fox 'News' FAIL on climate change; CNN looks for missing plane, finds an ocean full of garbage; PLUS: Energy company to pay record fine for 85 years of toxic waste dumping and they couldn't be happier about it... All that and more in today's Green News Report!

IN 'GREEN NEWS EXTRA' (see links below): GOP climate skeptic's on-air conversion in Showtime's 'Years of Living Dangerously'; Waters to flood part of CO River for just a few weeks; Final chapter of IPCC report to be published this week; Low-tech 'living fences' drastically reduce lion killings; Another oil spill on public lands ... PLUS: Scientists Focus on Polar Waters As Threat of Acidification Grows ... and much, MUCH more! ...

Thanx kids for a good GNR!!!