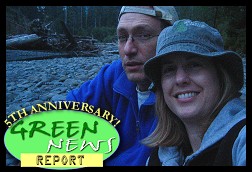 IN TODAY'S RADIO REPORT: Obama's plan to keep on truckin'...with much less oil; Secretary of State John Kerry goes 'weapons grade' on climate change; PLUS: It's GNR's 5th anniversary! So to celebrate, the Sunday network news shows all finally covered climate change --- really badly... All that and more in today's Green News Report!

Also of note: A video on the air pollution from fracking in Texas is on weather.com:

I was impressed to find it on weather.com.

Yup. We've got it listed above. (The version of the same story at Inside Climate News.)

You played it but did not emphasize it. Gregory started off by saying the "politics of weather". He may want to debate the "politics of weather" but the idea was that he was supposedly discussing CLIMATE change. This blatantly shows the ignorance and mental pygmyism of the Washington political media. Hearing that he wanted to have small talk about the weather would make me want to change the channel, so I could listen to a debate about climate. I guess people in the Washington media have forgotten or did not know that the DoD considers climate change one of the largest concerns that they have to plan for. Gregory may think it's just small talk but the DoD considers it very serious.

I was glad to see the Oklahoma report on the huge spike in earthquakes listed...just in case someone would think me nuts for agreeing with the National Geological study connecting the dots on fracking and earthquakes. The earth's crust is actually very thin and fragile, and fracking causes thin fractures to connect up to larger ones which will cause more extreme earthquakes when naturally occurring ones happen. Fracking is wayyyyyy dangerous in a myriad of ways.