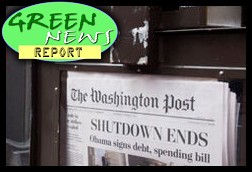 IN TODAY'S RADIO REPORT: The long national shutdown is over --- for now --- and environmental services and protections are returning; PLUS: Australia erupts in 'freakishly early' bushfire season; AND: The 40th anniversary of the 1973 Arab Oil Embargo ... All that and more in today's Green News Report!