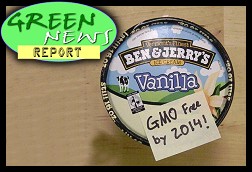 « PREVIOUS STORY "KPFK 'BradCast': The Blocked Prop 37 'Recount' and the Fight to Count Paper Ballots"
» Go to The BRAD BLOG front page «
"Fox 'News': Germany Leads World in Solar Because 'They Get a Lot More Sun Than We Do'" NEXT STORY »

Kinda confused about the Ben & Jerry's GMO report... are we saying that B&J had previously found that GMO's were...OK?...that they needed this report to show them the light? The same B&J...from Vermont?

Check out this article...it will give you some perspective on time...geologic ages...carbon and climate. As you read it, you could only wish that you and the Bradblog were around 50 million years ago to warn the dinosaurs of their impending doom.

Soul Rebel --- good question. Yes, it's the same Ben & Jerry's from Vermont, but the key difference is that they were bought by corporate giant Unilever in 2000, which proceeded to source GMO ingredients as a cost-cutting measure. The fact that GMO seeds are more expensive is not new, but the USDA study demonstrating greater cost-efficiency of non-GMO ingredients over the long term is a recent development, giving the folks at Ben & Jerry's actual data to show their corporate parents.

Good job, Davey --- so you see that climate is sensitive to drivers that cause the climate to change. This is shouldn't be a surprise to anyone who follows the scientific literature, as it is a well-established theory in paleoclimatology.

Check out the end-Permian extinction for a dramatic example of extinction-level climate change driven by massive vulcanism, which in turn triggered cascading positive feedbacks, ultimately leading to global catastrophe. (I'll see if I can find NatGeo's fascinating animation of the massive eruption of the Siberian Traps 250m years ago.) The Paleocene-Eocene Thermal Maximum (PETM) is another dramatic paleoclimate analogue showing how an atmospheric carbon pulse drove catastrophic climate change, but the link to vulcanism is less certain.

With that in mind, you can understand why climate scientists are alarmed, since the closest paleoclimate analogue to today's atmospheric CO2 levels was a predominantly ice-free period in Earth's history when sea levels were substantially higher:

“The natural state of the Earth with present carbon dioxide levels is one with sea levels about 70 feet higher than now.”

Two important differences this time around:

1. Humans are now the drivers of the current carbon pulse, releasing eons-worth of sequestered carbon back into the atmosphere, and

2. Humans are releasing this carbon pulse over a period of decades, not hundreds of thousands or millions of years, changing the chemical composition of the atmosphere faster than at any time in the past.

So we really are in uncharted territory.

May 2012 Chicago Tribune watchdog: Playing with fire. "The average American baby is born with the highest recorded levels of flame retardants among infants in the world. The toxic chemicals are present in nearly every home, packed into couches, chairs and many other products. Two powerful industries — Big Tobacco and chemical manufacturers — waged deceptive campaigns that led to the proliferation of these chemicals, which don’t even work as promised."

An especially sleazy and despicable campaign for flame retardants was led by a hack lying about horrible deaths of babies (who don't smoke) in testimony, with the intent to deflect a clampdown due to fires from smoking.
Why is the EPA "vowing to investigate" AFTER a newspaper investigation of ubiquitous household chemicals?

It is clear the EPA would never ban PBDE or decaBDE without alternative products to generate industry profits available.
http://yosemite.epa.gov/...a4b0068a181!opendocument

The volcanoe eruption theory as a cause of the dinosaur extinction was debunked by a panel of 41 scientists in 2010 (SCAD).

It is the consensus now.

Neither of which have anything whatsoever to do with anthropogenic global warming induced climate change.

The Catholic prophecy that the next Pope following Benedict XVI, who just announced his resignation, will be the last Pope has noting to do with climate change either, even though it says Rome will be destroyed --- ending the Papacy.

Dredd, that is too weird about the prophecy! I guess it would be scary, too, if such things had any impact on things like universal physical laws or reality.

Re: the study on volcanoes as a driver of climate change...the study in the article that Davey linked to doesn't necessarily negate the meteor impact theory or the findings of other studies implicating different styles of massive volcanic eruptions as contributors. Some theories posit it was a one-two punch. It's also important to keep in mind that no single study can prove or disprove any particular hypothesis; many, many more studies are required.

The point again, as always, from here on out, is that this time humans are the drivers.

All those existing theories were considered by the distinguished panel of scientists, seeing as how the volcano theory was the one in vogue for 5 decades or so.

The volcano theorists had their shot but could not hold under the new and compelling scientific data that prompted those 41 distinguished scientists, who were charged with that very task, to determine that it was in fact the asteroid that caused the dinosaur and other extinctions.

What confuses a lot of people about natural climate change is that they do not take axial precession into account.

I linked to supporting posts in my comment above.

But yes, the Catholic Prophecy done by a Catholic Saint, is quite interesting.

And it is now going to be proven true or false before our eyes (may take quite a while if they choose a young fellow).

« PREVIOUS STORY "KPFK 'BradCast': The Blocked Prop 37 'Recount' and the Fight to Count Paper Ballots"
» Go to The BRAD BLOG front page «
"Fox 'News': Germany Leads World in Solar Because 'They Get a Lot More Sun Than We Do'" NEXT STORY »
See MSVL and support BRAD BLOG! Click here for signed premium version!