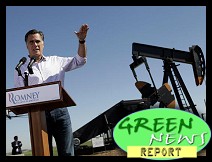 IN TODAY'S RADIO REPORT: A Green News Special Report: Mitt Romney's Energy Agenda - oil, oil and even more oil; PLUS: A hurricane of irony threatens the Republican National Convention in Tampa ... All that and more in today's Green News Report!

Anyone else find it funny that Romney unveiled Atlantic offshore drilling when he was in.........New Mexico?

Anyone else find it funny that Romney unveiled Atlantic offshore drilling when he was in.........New Mexico?

Ha! You're right! What a coward.

Hey, Rush Limbaugh. Maybe it would be better if we had George Bush's FEMA in place. If the winds blow the roof off the convention center and the GOP big wigs are left stranded inside without food or water, FEMA could then take its sweet time before showing up with aid.

Wouldn't that be a hoot. Helicopters circling overhead and the Romneys and friends hold up their hands and shouting, "help, help, help."

Pay back would be a bitch.

I don't know whether Obama is entitled to the label "green" candidate or whether that should be reserved for Green Party candidate Jill Stein.

But I know what Romney is. He's the grundge candidate.