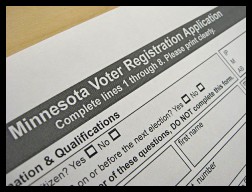 In his 22-page Memorandum of Opinion and Order [PDF], Judge Frank rejected the plaintiffs central claim that MN Secretary of State Mark Ritchie and other election officials "violated the rights of eligible voters by diluting their votes with the votes of EDRs [Election Day Registered voters]."

Plaintiffs claims, the court stated, were "based on the erroneous premise that election officials must verify voters' eligibility before their votes are counted." Citing appellate authority, the court noted that "flawless elections are not constitutionally guaranteed" and that the plaintiffs had failed to allege facts that would establish that state election officials "engaged in invidious discrimination or intentional misconduct."

Judge Frank also ruled that the plaintiffs had admittedly failed to exhaust state remedies which would have permitted them to challenge an individual's eligibility to vote.

While Election Day Registration in MN is preserved, for now, it remains at risk thanks to a second prong attack on the state's popular, and inclusive, program ...

As we previously reported, because MN offers EDR and one of the nation's most liberal voter identification systems, the Land of 10,000 Lakes possesses one of the highest records of voter participation in the nation. It ranked first in the nation during the 2008 Presidential Election and second during the 2010 midterms --- a record that is anathema to the goals of anti-voting groups, such as the American Legislative Exchange Council (ALEC).

The corporate lobbying group ALEC has long been a central force in the Rightwing push for disenfranchising polling place Photo ID restrictions and other efforts to help suppress the vote.

"I don't want everybody to vote," ALEC co-founder "conservative" movement demi-god Paul Weyrich admitted (see haunting video at right) to a crowd of evangelical preachers in 1980. "Our leverage in the elections goes up as the voting populace goes down," he added after denigrating those who seek "good government" through maximum, informed voter participation, as people who suffer from what he described as "goo goo syndrome."

While Judge Frank's ruling dismissed a direct assault on EDR --- and upon high voter turnout --- during oral arguments in a separate case, League of Women Voters of Minnesota v. Ritchie [PDF], several Justices of the MN Supreme Court expressed concerns that a deceptive GOP-enacted ballot measure, set to be voted upon this November, could also threaten the state's long-standing tradition of Election Day Registration. That initiative, now being decided by Minnesota's high court, seeks to impose state-issued Photo IDs at the polling place as a prerequisite to in-person voting. Critics of the measure, and several of the Justices, note that the ballot measure could also serve to eliminate EDR because it would force MN to utilize a provisional balloting system. Sec. of State Ritchie expressed the same concern in remarks he made on Friday in response to Judge Frank's ruling.

* * *
Please support The BRAD BLOG's fiercely independent, award-winning coverage of your electoral system, as available from no other media outlet in the nation, with a donation to help us keep going (Snail mail, more options here). If you like, we'll send you some great, award-winning election integrity documentary films in return! Details right here...
Tweet
Reader comments follow below ad...

« PREVIOUS STORY "Crashing the Parties: Mike Lofgren on 'Crazy' Republicans, 'Useless' Democrats, Who's To Blame and What Can Be Done About It"
» Go to The BRAD BLOG front page «
"California’s Deceptive Prop 32 Would Solidify the Corrupting Influence of Corporate Wealth and Power Under the Guise of Special Interest 'Reform'" NEXT STORY »

Off topic, but maybe not. In reading an old New England cookbook , there was a recipe for Election Day Cake. It seems that everybody got off of work on Election Day. A special cake was baked.Celebrating democracy.

Are we going forward? The American myth that every generation is getting smarter, better and more educated seems to have come crashing down here in 2012. With a slow descent before the crash.

My plans, instead of the cake, is demonstrating at the democratic national convention Sept. 3-6 at Charlotte NC. Hope to meet up with some of the wonderful young Occupy people. Gonna' celebrate turning 70 , but not democracy.

« PREVIOUS STORY "Crashing the Parties: Mike Lofgren on 'Crazy' Republicans, 'Useless' Democrats, Who's To Blame and What Can Be Done About It"
» Go to The BRAD BLOG front page «
"California’s Deceptive Prop 32 Would Solidify the Corrupting Influence of Corporate Wealth and Power Under the Guise of Special Interest 'Reform'" NEXT STORY »
See MSVL and support BRAD BLOG! Click here for signed premium version!