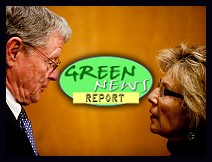 IN 'GREEN NEWS EXTRA' (see links below): What the Olympics can teach about going green; IRS exempts tar sands crude oil from spill tax; BP Gulf Oil Spill: Dispersants may have hurt food chain; EPA can't regulate CAFOs it can't find; Global wind energy to grow 40% by 2017; NREL: Solar has most potential in US; How much excess CO2 can the planet absorb?; Melting Greenland eyed for mineral riches; Frackers in your backyard ... PLUS: Nano Breakthrough Paves Way for Super Cheap Solar Panels ... and much, MUCH more! ...