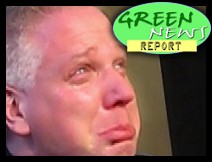 IN TODAY'S RADIO REPORT: More U.S. Chamber of Commerce propaganda to support the GOP v. EPA in the House and Senate; Clean energy v. Oil in the budget shutdown showdown... PLUS: Signs of stabilizing at the Fukushima nuclear plant, as yet another earthquake rocks Japan's devastated coastline ... All that and more in today's Green News Report!

Yeah, somebody needs to watch Schoolhouse Rock again. And not just the one about how a bill becomes a law, but also some of the math bits, because climate-hatin’, dictator-lovin’ Jim Inhofe declared this a “90 percent” majority. For those of you who also need an elementary school refresher, there are 100 senators, and 64 out of 100 is 64 percent. But 90 percent of made-up statistics are “90 percent,” we find.