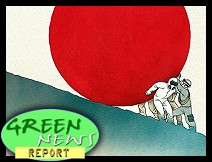 IN TODAY'S RADIO REPORT: Not out of the woods yet: Japan's nuclear and humanitarian crisis continues as electricity returns to the Fukushima nuclear plant which remains precariously on edge while radiation poisoning is found in milk, vegetables and sea water --- but Japan's wind farms come to the rescue and new nuke reviews are set for US plants; PLUS: Surprise! A new 100-mile oil slick spotted in the Gulf of Mexico ... All that and more in today's Green News Report!