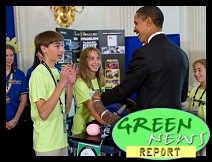 IN TODAY'S RADIO REPORT: The "Global Warming Myth" myth that keeps on giving; 2010 still on track to be hottest year ever; CA's Prop 23 gets Avatar'd ... PLUS: The first-ever White House Science Fair ... All that and more in today's Green News Report!

But that's not because Americans are particularly well-informed about climate science—or science in general, it seems.