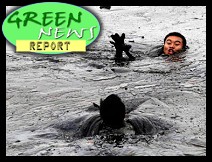 IN TODAY'S RADIO REPORT: China, drowning in oil --- literally; Bobby's berms a bust?; Gulf waters now safe for fishing?!? (except when it's exploding) ... PLUS: Waytago, oil companies! (Did we just say that?!) ... All that and more in today's Green News Report!