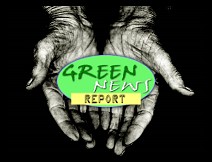 IN TODAY'S RADIO REPORT: The First Lady goes to Haiti; Earthquake in Tibet; Volcano in Iceland; Climate scientists cleared of wrongdoing --- AGAIN ... PLUS: A War on Coal? Coal industry in the hot seat on Capitol Hill... All that and more in today's Green News Report!

« PREVIOUS STORY "Conyers Seeks Firing of FBI Officials Who Used 'National Security Letters' for Phone Records"
» Go to The BRAD BLOG front page «
"Toto, We're Not in Denial Anymore (But You Are)" NEXT STORY »

Way to go DES! leading with Biotech-
keep it up! check this incredible craziness out-
GM crops and honeybee die off http://www.gmwatch.org/c...s-and-honey-bee-research

Kremer, who works for the U.S. Department of Agriculture's Agricultural Research Service (ARS), is among a group of scientists who are turning up potential problems with glyphosate, the key ingredient in Monsanto's Roundup and the most widely used weed-killer in the world.

"This could be something quite big. We might be setting up a huge problem," said Kremer, who expressed alarm that regulators were not paying enough attention to the potential risks from biotechnology on the farm, including his own research.

all the best,
Cauldron

Hey Des, I was just thinking...maybe someone should suggest to gates that our iran policy might include redirecting billions of our tax dollars from our own WMD to alternate energy and not killing two birds with one stone.