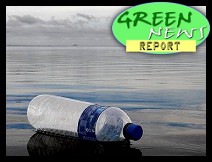 IN TODAY'S RADIO REPORT: World Water Day; Remembering a champion of conservation; Record Canadian winter, record Beijing dust storm; No ban for the Bluefin Tuna (Sorry, Charlie!)... PLUS: The U.S. Chamber of Commerce grows its own astroturf group!... All that and more in today's Green News Report!

Here is the best argument against global warming:

Oh, right. There isn't one.

Ha HA! Cute but there are MANY scientific arguments against man-made global warming. And many mainstream credible scientists that think warming is not man made. Scientists are as susceptible to corruption and manipulation and error as anyone. Many are paid to report only certain data sets.

Oh right- temperatures have been flat for a decade- there was a medieval warming period warmer than our own, Mars was also warming and what else??? oh, lot's of glaciers are growing. Just check the first comment after that guys hokey article. As if science were some perfect system!

Why not report something that is really dangerous? Like genetic manipulation of plants and animals, which brings no benefits other than profit, yet imperils our health and the health of the planet. And report how the media lies about them, esp. WSJ and NY Times and NPR, and total silence from The New Yorker. And Bill Gates just LOVES them. betcha he eats ALL organic, don't you? Start here:

Thanks for your comment, Cauldron. We have reported on GMOs, Monsanto, and other aspects of consolidation and corporate control of global agriculture, and will continue to do so.

Yes, there are "many scientific arguments against global warming", but all have already been examined, addressed and dismissed, or otherwise been superseded by new field data. ALL of the common zombie assertions you have made have ALL been debunked.

Luckily, you can pre-bunk yourself next time by looking up any skeptic argument you're about to make at SkepticalScience.com. It's the most comprehensive and easy-to-understand compilation of all the denier/skeptic arguments, with an equally accessible overview of what we currently know, and don't know, in the science today.