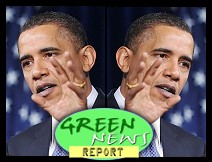 The national media’s continued silence on ClimateGate and increasing revelations of outright fraud and wrongdoing at all levels of government, academia and the media itself, tells the truth of the tail. That truth is there's a lot more to this ClimateGate story than what little is being reported. The small (2 to 3 dozen) international cabal of climate scientists could not have possibly gotten to this point without extraordinary funding, political support at virtually all levels of government, especially at the national level and unparalleled cooperation from the national and world media. This wide-spread networked support continues even as we the people puzzle over what this is all about. I ask you, "What are you seeing and hearing from our national media on the subject?" Anything? What are you seeing and hearing from all levels of our government, local and regional newspapers and media outlets? Anything of substance? At all of these levels the chatter has remained remarkably quite on the subject, wouldn't you say? Why? What points and positions are you beginning to hear on the radio and see on the television? This cabal of scientists has an unprecedented level of support given the revelations contained in the emails, documented in the computer software code and elaborated in the associated programmer remarks (REM) within the code. And ---- this has gone on for years, AND continues even in the presence of the most damning evidence one could imagine, or even hope for. Watergate pales in comparison, given the trillions of dollars in carbon offset taxes, cap & trade fees hanging in the balance and the unimaginable political control over people’s lives this all implies. The mainstream media's conspiracy of silence proves the point. Their continued cover-up is as much a part of this crime as the actual scientific fraud. ABC, CBS and NBC are simply co-conspirators exercising their 5th Amendment rights.

I'll give you a warning this time, John. Our rules are very few here at The BRAD BLOG, but knowingly spreading dis-information and mis-information is a ban-able offense here.

We'll give you the benefit of the doubt that you were somehow unaware of the volumes of weeks-long coverage in the broadcast, cable, print and online media of the hacked and stolen emails from climate scientists that the climate change denial industry dubbed "Climategate".

CNN alone devoted an entire week of primetime programming on the Campbell Brown Show alone, investigating and examining the allegations. The broadcast networks (ABC, CBS, NBC) covered the story for a full week in their national newscasts. The print and online media published mountains of stories thoroughly examining and investigating the story.

The only part of the story the mainstream media has ignored has been the exoneration of the scientists showing they committed no scientific misconduct.

None of your allegations are true, period.

There is no 'conspiracy of silence' except for those people for whom no amount of corroborated evidence or fact will sway their deeply held "beliefs".

There is nothing in those emails, the climate models, or ANY of the research from the Climate Research Unit at the University of East Anglia (the research organization involved in the stolen emails) that overturns the basic physics of the interaction of C02 with sunlight, or the basic chemistry of CO2 interaction with seawater.

There is nothing in those emails that overturns the conclusions of NASA, the World Meteorological Organization or every major scientific organization around the world that the last decade was the hottest in the instrument record.

There is nothing in those emails or in the climate models or even the coding that overturns ANY of the field data gathered over the decades across all Earth systems disciplines of human-caused climate change, all of which was gathered independently of the few climate scientists involved in the hacked email controversy.

In short, the only "conspiracy" over the hacked and stolen emails is the continued push from the climate change denial industry to flog this dead and fully debunked horse. You've been had.

If you would like to return to the reality-based world, please go to SkepticalScience.com and get the facts.

Next time, before you post, first educate yourself on the facts and remember that we do will not tolerate knowingly spreading mis- or dis-information. You've been warned.

We won the election and now these sore losers will continue to spew your hate with lies. The way our courts work is that you get a competent lawyer, verifiable facts and present them to a judge, if the facts are real and not half baked lies, then, and only then, you proceed to trial. The Birthers seem to be having a problem with their so called facts that they present. Let’s face it no one will go along with you until you guys win a case, but until then, you will continue to appear dumb, crazy or racist, or maybe all three. Keep plucking that chicken.