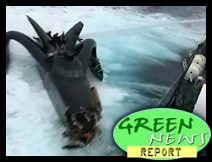 The title of the piece, "Four Climate Activists Jailed for Saying 'Coal's Killing West Virginia's Communities'" is a bit misleading.

Actually, they were charged with trespass, though the real question is whether the formal charge was but an excuse to try to intimidate the activists for exercising their First Amendment rights.

“These four people are guilty of nothing. They were simply present during a
demonstration last October and none of them were ever informed at any time that they were trespassing. Usually in this type of case they simply write you a ticket or mail you a summons. To drag them out of their homes and refuse to allow any bail violates their most basic constitutional right to due process.”

Soy extracts are used to treat Prostate and Testicular cancers.

A Heavy soy diet is like being on Estrogen therapy, especially when you consider that soy is present in EVERY single piece of processed food made in America.

My wife is a thyroid cancer survivor and taught me an awful lot about the interaction of food products and the endocrine system.

The way they ran over that boat makes me sick. What fucking assholes.

Thanks for the heads-up on Silk Soy Milk; also I followed a link to an article which advised about Horizon (NOT) Organic Milk. I didn't know about Horizon and I have been getting ripped off, spending my money on something that was supposed to be organic but is not. Thanks for including this type of item in Green News Extra.