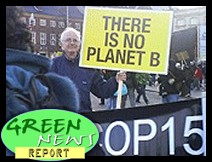 IN TODAY'S AUDIO REPORT: Copenhagen Wrap-up: After high stakes diplomacy and high comedy, the U.N. conference ends with something resembling an agreement --- but is the glass half-full, or half-empty? ... PLUS: Was she lying then, or is she lying now? Sarah Palin was for action on climate change before she was against it ... All that and more in today's Green News Report!

« PREVIOUS STORY "Obama Will Win: Why and How His Critics from the Left and Right Will be Proven Wrong"
» Go to The BRAD BLOG front page «
"ACORN Cleared YET AGAIN of Wrongdoing" NEXT STORY »

Well, odd then that on Democracy Now! they were griping that Obama bowed out early because of bad weather. Do we now have to sift through all the doublespeak to the point where we can't even find agreement on how long the president stayed? I have to say that if they put it between the AP and Amy Goodman, I'm going to have to go with the latter, credibility-wise....

... especially since she was there for the whole two weeks....


GEORGE MONBIOT: Well, I can hardly express my disappointment with Mr. Obama. Like many of the world’s people, especially those on the liberal and left, progressive ends of the spectrum, I placed great hopes in him. He was a man who was a source of inspiration. And I feel incredibly let down and betrayed.

What Obama and the US delegation have done this time round is very similar to what George Bush did over Iraq, which was to bypass the United Nations, to go behind the backs of the majority of nations, and try to create a coalition of the willing. And in doing so, he effectively trashed the talks. It’s absolutely true that the Chinese delegation was being very intransigent and very difficult, but Obama, what he did was to demand that the Chinese delegation change its position without offering anything at all in return.

And we all assumed that—those of us who are environmentalists, who have been following this process, assumed that the dreadful US negotiating position was just an opening bid, that the very poor target and very poor timetable offered by the United States was just the bargaining position and that it would open up from there on. But it soon became clear that there was nothing else on the table and that Obama was not going to raise that bid, and that while he was demanding that the rest of the world take action, he was not prepared to take any further action himself.

And the reason this is such a disappointment is that this was a man who was going to put aside childish things. This is a man who was going to do what was right, not what was expedient. And in this case, he was faced by the greatest challenge the world now confronts, and he was the only man who could break the deadlock. And instead of breaking the deadlock, he ensured that that deadlock became inevitable, and he broke the talks. And we now have a situation where the momentum might never be recovered—

AMY GOODMAN: Wait, wait. But, George Monbiot, explain what you mean by “he broke the talks.”

GEORGE MONBIOT: Well, he just was not prepared actually to negotiate; he was prepared only to demand. He made demands on the other nations, but he didn’t offer anything in return. And that’s not negotiation. That’s just gunboat diplomacy. And unless you are prepared to offer something in return, all you can do is to humiliate the other side. And, of course, the Chinese, in particular, are very sensitive to humiliation, and losing face is a very, very big thing in China. And the way Obama laid it on the line to them, it was “Do as I say, or the whole thing collapses,” rather than, “If you do this, I’ll do that, and we’ll have a deal.” There was no deal making being done. All it was was just this brutal demand. And I can understand that if it was coming from the Bush presidency; it’s much harder to understand coming from the Obama presidency.

AMY GOODMAN: And explain exactly what the demand was.

GEORGE MONBIOT: Well, the demand was that China open itself up to verification and monitoring of its greenhouse gas cuts. Now, that, in itself, is a perfectly reasonable demand. And in negotiation, everybody makes demands of everybody else. That’s what it’s all about. That’s how you strike a treaty, you strike a deal. But in this case, Obama was not saying, “If you do this, we will do that, we will raise our targets, we will improve our timetables, we will firm things up.” That just wasn’t put on the table.

And then he sort of, finally, walks out saying, “We have a deal,” lands it on the rest of the world, which hadn’t taken part in that deal—I think there were only five nations involved in these private meetings he had—and then says, “Sorry, must go to Washington. Bad weather.” And I’m afraid it’s just not good enough.

AMY GOODMAN: It was interesting that bad weather was the reason.

AMY GOODMAN: The climate was the reason for cutting short the talks.

« PREVIOUS STORY "Obama Will Win: Why and How His Critics from the Left and Right Will be Proven Wrong"
» Go to The BRAD BLOG front page «
"ACORN Cleared YET AGAIN of Wrongdoing" NEXT STORY »
See MSVL and support BRAD BLOG! Click here for signed premium version!