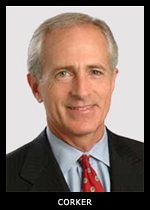 Sen. Bob Corker (R-TN) is considered an intellectual lightweight back home in Chattanooga, where he once served as mayor. So you know it's getting bad when Corker slips up and tells a hometown audience the unfortunate truth that in meetings with George Bush, he has been "underwhelmed" by Bush's knowledge and understanding of the U.S. occupation of Iraq.

In remarks to a group of about 500 Republicans on Tuesday, Corker "raised some eyebrows," according to a local media outlet, when he recounted details of his recent visits to the White House:

"I was in the White House a number of times to talk about the issue [of Iraq], and I may rankle some in the room saying this, but I was very underwhelmed with what discussions took place at the White House," Corker said.

A few minutes later during a question and answer session a man in the audience asked him to clarify his statement.

"I was concerned about your statement that you were underwhelmed with what was going on in the White House. Did you mean with him or with his staff?"

In response, Corker said, "Let me say this. George Bush is a very compassionate person. He's a very good person. And a lot of people don't see that in him, and there's many people in this room who might disagree with that.... I just felt a little bit underwhelmed by our discussions, the complexity of them, the depth of them."

Corker quickly added that he supports Bush's occupation of Iraq --- even though he just admitted that Bush himself doesn't understand it --- and that all that is needed to turn things around is an increase in both the size of the U.S. government and the amount of happy-talk propaganda it spews at the public:

...I do believe that the most recent course of action we've pursued is a good one. I feel like what we've lack in our country is a coherent effort that really links together the Treasury Department, all the various departments of our government in a way that really focuses not just on the hard military side of things, but also the soft effort that it takes to build good will among people.

The senator then hastily added that he regretted having just expressed his true assessment about Bush's feeble intellect:

I really think much of that has righted itself, I'm just telling you that at that moment in time I felt very underwhelmed, and I'm just being honest. I've said that to them, and to him, and to others. I kind of in a way wish I hadn't said it today."

The last comment was greeted with laughter in the crowd.

Rest assured that Sen. Corker will never make the mistake of expressing an honest opinion in public again.

READER COMMENTS ON
"Even Lightweight GOP Sen. Corker Is 'Underwhelmed' By Bush's Grasp of Iraq Details"
(3 Responses so far...)

I live here in TN, and I didn't vote for Corker, but I wonder what he's done to be called an "intellectual lightweight" in Chattanooga. Anybody know?

It's hard to imagine anyone saying Bush is a good and compassionate person for any reason, Bush was chosen to be "president" because he gives the impression of being a dumb stumbler. but the knows what his handlers want him to do including dropping bombs on civilians, destroying New Orleans, creating vets who are underfunded and destroyed, 9/11, etc.

Funny. I wish he would have stood up.

If you can't have an honest opinion.

Then again, if handing the crime up makes you a target what do you do? Live in fear? I know I do.