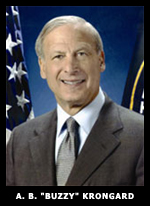 In a memo released late today Henry Waxman, chairman of the House Committee on Oversight and Government Reform, says he and the committee will look into allegations of perjury against State Dept. Inspector General Howard Krongard:

On Wednesday, November 14, 2007, the full Committee held a hearing entitled, "Assessing the State Department Inspector General." At this hearing, Inspector General Howard J. Krongard testified that his brother, Alvin "Buzzy" Krongard, told him that he was not on the board of Blackwater USA and had no connections to Blackwater. Yesterday, in response to a letter from the Committee, Buzzy Krongard called the Committee staff and said that contrary to Howard Krongard's testimony, he did tell his brother about his relationship with Blackwater.

Read the rest of Waxman's memo:

« PREVIOUS STORY "In November 2006, Two Machines 'Smoked' - Only One Was Recalled"
» Go to The BRAD BLOG front page «
"VIDEO MASHUP: Who Won The Nevada Democratic Presidential Debate?" NEXT STORY »

Plugged on the Malloy show.

Hmm so "Buzzy" which is current CIA is on the board of Black water and just happens to be the one that also was clairvoyant enough to place many of those "put options" on United airlines just prior to 9/11.

This government is so insanely corrupt that I'm not sure its even salvageable anymore.

Buzzy and Cookie are mob with CIA connections. Baltimore. This gets scary now for Waxman. There has been suprisingly little press considering what a juicy tale this is.

Think about the contrast between Barry Bonds and Howard Krongard. There is no justice:

Good read:
Bonds vs. Krongard: And the Winner Is....

The Krongard Brothers: "Buzzy" and "Fuzzy" as in "I don't recall".

Didn't you know? Perjury is now legal for public officials under the Bush administration. They have a different set of laws than the rest of us!

Did this country ever use firing squads ?

Henry Waxman, you have give him the credit he is due. Persistent, tenacious, level headed, and a true American, not the traitor Hannity kind.
I am honored to witness his work during these times.

The Krongards ar bad bad men and AB Brown Bank was involved with the placement of several put-options just before 911. There is still 2.5 million in American Airlines put-options that remain unclaimed. Of course investigations were buuried and redacted.There is an active effort to take over this country by right wingers. How do they organize and keep secrets? One only has to look at their greedy nature and the 'oath of secrecy' to understand why secret societies are the absolute worst entities to be involved in civil government. They're baaack. Mukasey is the latest bonesman to be appointed. Everyone could learn something by researching the US 1830 Anti-Masonic Convention. They are back in politics just totally underground now.

Wake up and understand that the nazi supporting Bush family (Bavarian Illuminati Busche oh by the way George Walker Busche 666), now has 50 years of marketing and pys-ops research behind them. The have even co-opted righteousness as the story is supposed to go.

The Oligharcy is in control, witness Cheney's secret energy meetings. Exploitation of people and resources in an unbalanced lust for profit is how a macro cancer operates. Massive action by the healthy cells must be powerful and swift and even sacrificial in nature, or the cancer wins and the host dies. The way of the micro body and the earth. Apoctotic Mechanism.

911 is the key, and the NCIS still has not released their WTC Tower 7 report after 6 years? These men are vicious, vindictive killers, and thieves. The command structure of secret societies insures the enlistment of only the most loyal for any 'project'. Money is the motivator and sworn oath, and the billions in gold unaccounted for under the towers a very nice payoff for the hundreds if not thousands directly involved. A House investigation into secret societies/GOP in government and the military will never happen unless we demand it. Mukasey was in the same class and program as GW in Yale yet Skull and Bones membership never comes up?

Krongards could be the straw to break these unholy camel.s backs if only they will ask the right questions.

Actual Proceedings of the convention. The Freemason modis operandi is Bushco and the neo-cons all the way.Basically make you buddies rich.

Does anyone remember when Buzzy told everybody to leave Osama alone in 2005?